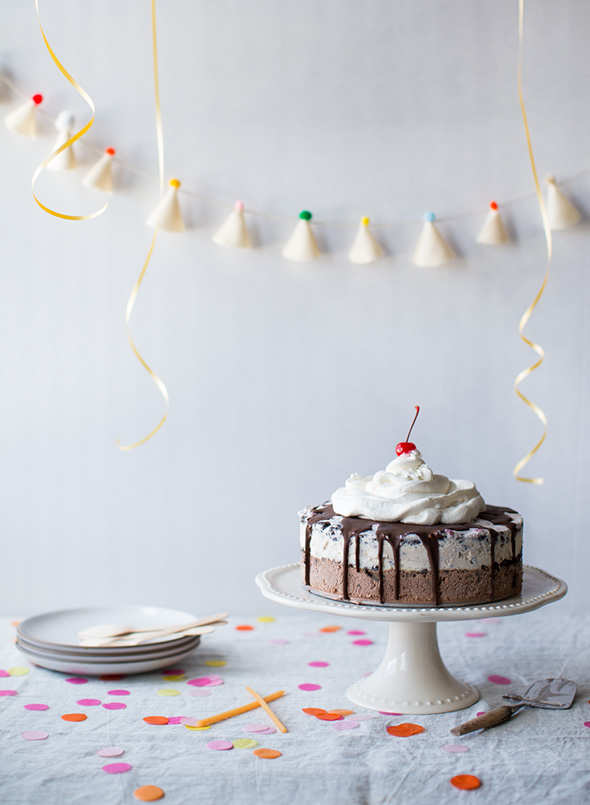 Growing up back in New York, every birthday I would ask for an ice cream cake. What I had in mind one were those fancy Carvel ones I occasionally had at rich kids’ birthday parties and my mother did her best to recreate it for us. She’d take a block of ice cream (remember when ice cream was sold in blocks??) and decorate it with cookies and such, a candle on top. It was so easy, we loved it and the tradition is a sweet family memory of mine.

Since Edie is a huge ice cream fan I knew I wanted to make an ice cream cake for her 2nd birthday instead of regular cake. But, I was interested in making one that was in the shape of an actual cake (more like the Carvel version) and here’s what I came up with!I t’s really easy, but it takes planning. I did a layer (each one took 5 minutes) each night starting Friday night for the party on Monday. Layers are from bottom to top: chocolate peanut butter, crushed oreos, chocolate chip cookie dough, crushed oreos, raspberry cream, magic shell, whipped cream, cherry on top. You could also add sprinkles or nuts or other fun ice cream sundae toppings. 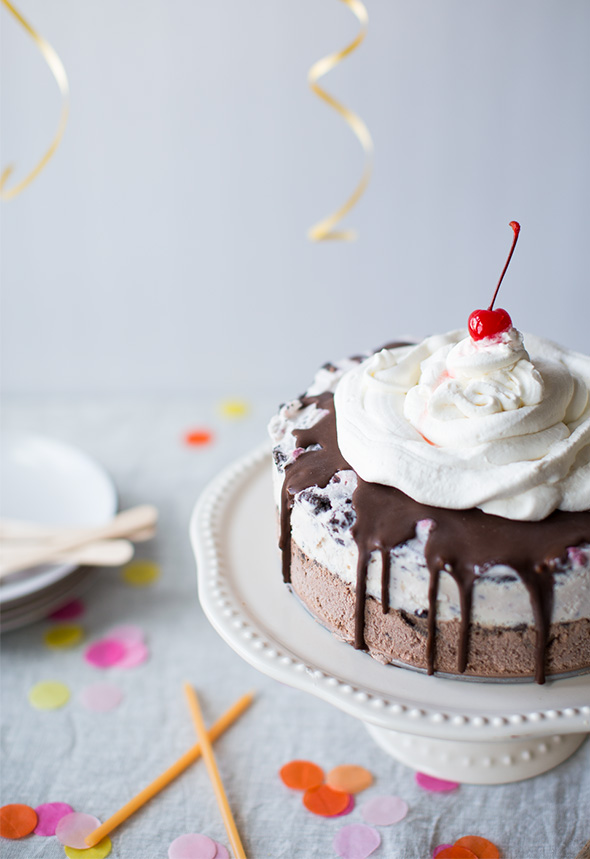 Keep reading for steps on making your own… 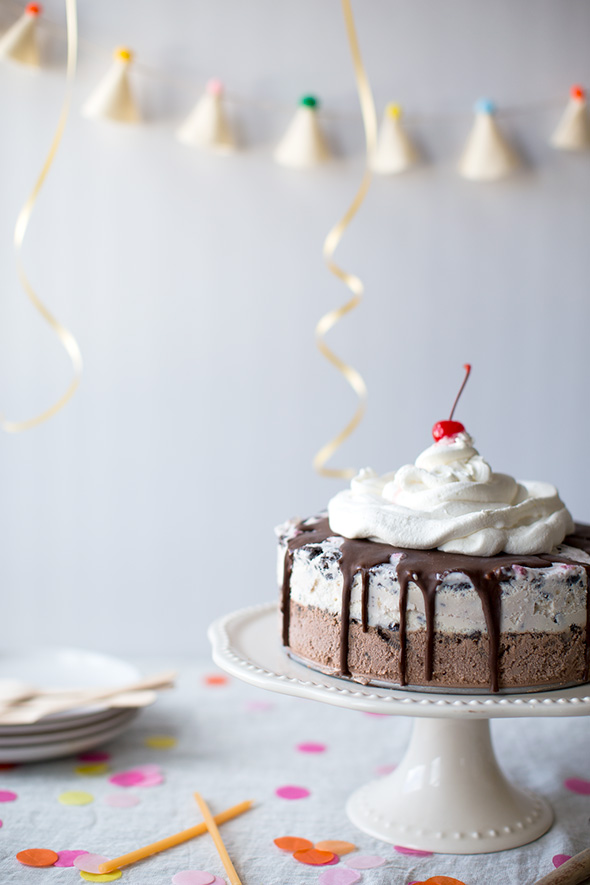 1.  Layer 1: Chocolate Peanut Butter. Allow your first layer (mine was chocolate peanut butter) to soften for about 20 minutes then place in a standing mixer and mix under it’s evenly smooth. Press it down with a spatula into the bottom of a spring form pan. Crumble crushed oreos on top of that later. I used a full box of those oreo thins because they had less cream filling and I really wanted the chocolate cookie part. I would not skimp on this layer, even with a full box for each layer it was barely enough! Allow this layer to freeze completely overnight. I put plastic wrap over.

2. Layer 2: Chocolate chip cookie dough. Do the same as layer 1. Soften the ice cream for 20 minutes and mix until it’s smooth in a stand mixer. Spread on top of the first layer in the springform pan. Sprinkle with crushed oreos as well. Freeze with plastic wrap over the top.

3. Layer 3: Raspberry Cream. By layer 3 I was already at the top of my pan so I did a thin layer of the raspberry cream (same process as above) but with no oreos on top. Cover with plastic wrap and freeze completely. 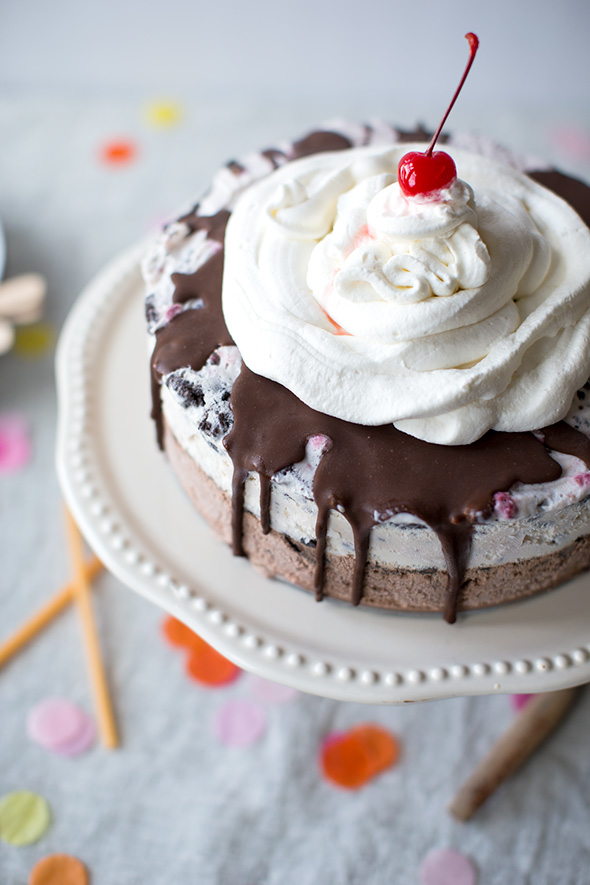 4. Magic Shell. I was contemplating using hot fudge but magic shell is so easy because it hardens almost immediately when it hits the ice cream and I love that hard crunchy layer on top. I removed the outer section of the springform pan (leaving the bottom plate) and poured on almost a full bottle of magic shell on top and let it drip down the sides a bit. Put it back in the freezer while you prepar the last layer.

5. Whipped Cream: Make a batch of whipped cream by mixing up 1 cup of whipped cream with about 1/4 cup of powdered sugar in a stand mixer until stiff peaks form. Spread onto the top of the magic shell and top with a cherry and candles to serve! 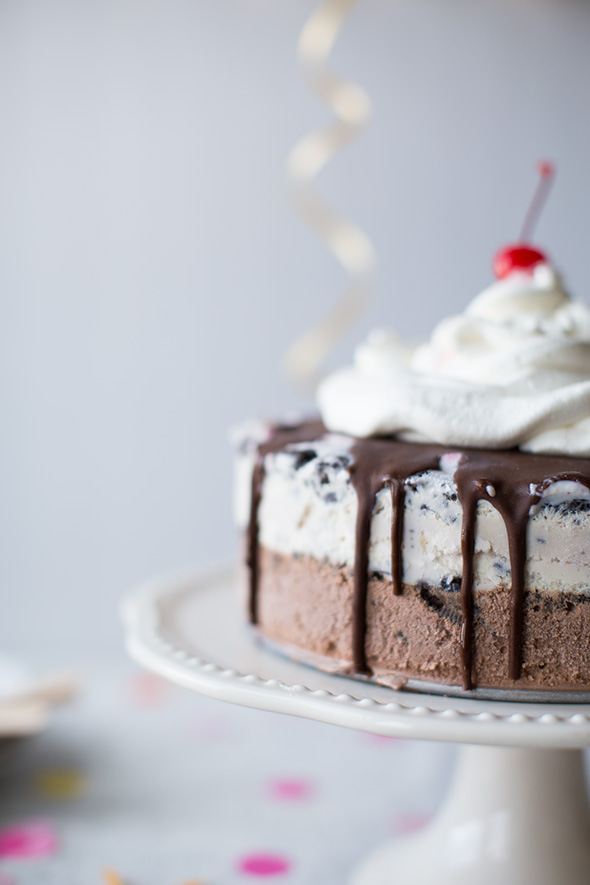 A note for serving it: I was nervous about it melting so I pulled it out of the freezer right when we were ready to serve it and placed it on a cake plate. However, I wish we would have left it out for about 10-15 minutes or so. It would have been easier to cut when it wasn’t so frozen. 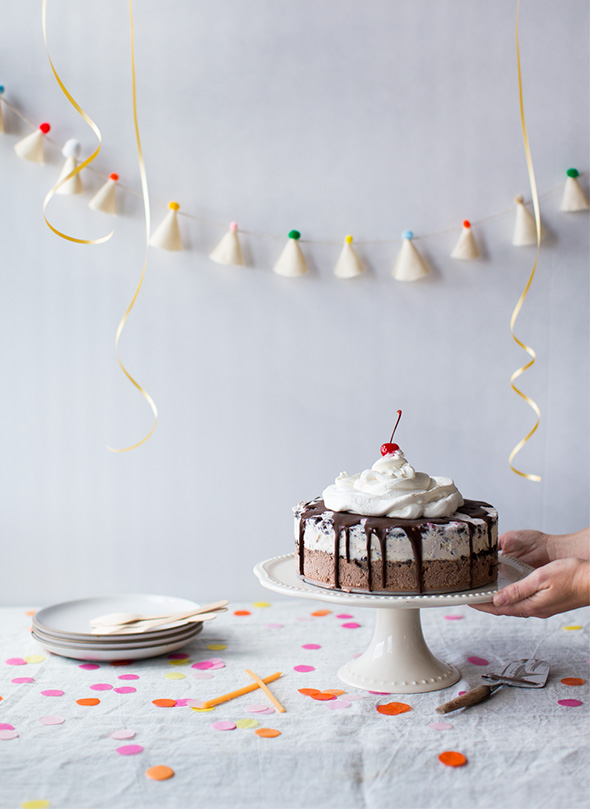 Enjoy! I’m going to have a little leftover slice tonight after the kids go to bed…

Photography by Liz Stanley. Asissted by Sarah Iveson and Henry for helping me test each flavor and clean the bowl after each layer

This looks delicious, I’ll have to give it a try. Ice Cream Pie was a favorite in our household growing up (still is, actually). We ONLY made it for birthdays which made it even more special and to this day, when asked what kind of birthday cake I want, answer is always ice cream pie. This is a very similar recipe to the one we use. But beware, it is REALLY good! Enjoy!!! http://www.food.com/recipe/rosalies-ice-cream-pie-with-peanut-butter-crust-93398

This ice cream cake looks amazing! My mom always made homemade ice cream cakes for us each year and they’re always the best! We’ll have to try making our own soon!