We have another in our series on sisters today, My Sister My Sidekick and I’m excited about this one! Sabrina and Eunice Moyle are more than just sisters, they’re business partners of the stunning letterpress card and stationary company, Hello! Lucky. Daughters of a Foreign Service Officer these sisters were born in Maryland and grew up all over- in Libya, Burma, Malaysia, Taiwan, and China (and traveled the rest of the world in-between) and have found themselves influenced by Asian culture in their work. Also, having a smart, crafty mother, they’ve been practicing they’re creativity and business skills since they were little, like making their own version of a Barbie Dream House their mom wouldn’t buy! Sabrina and Eunice independently found themselves in the Bay Area back in 2000 and when Eunice developed a minor obsession with letterpress Sabrina decided to help her turn it into a business. Now knee deep and 12 years into their company they are closer than ever.
A little introduction: 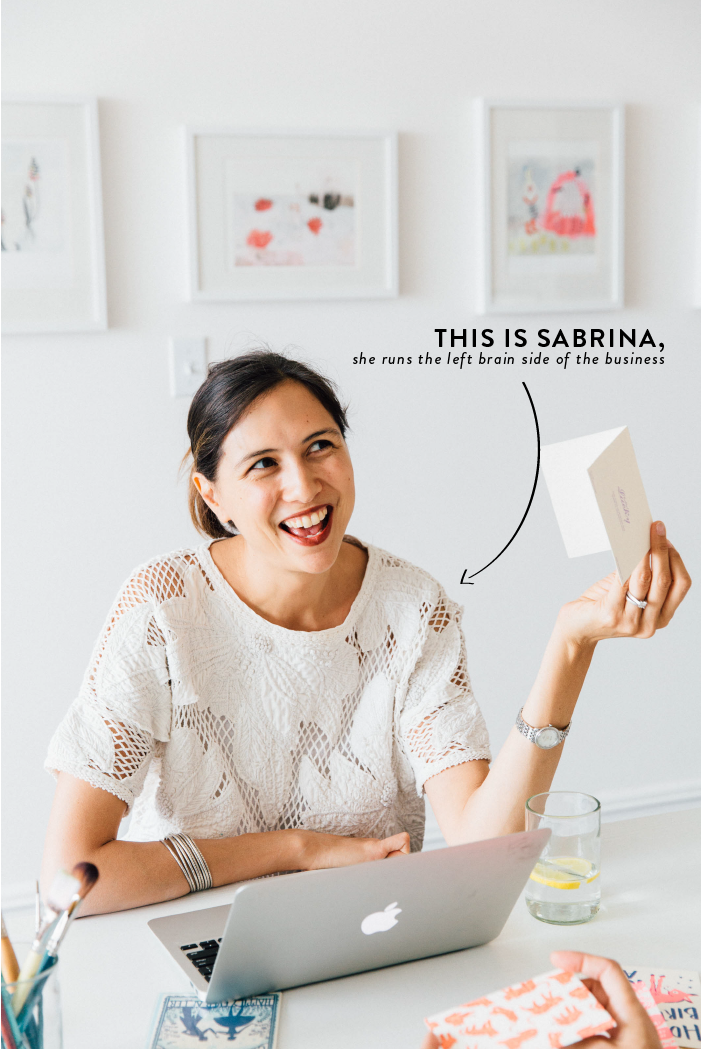 Sabrina runs the left brain side of the operations. She wrangles numbers, generates concepts and is a master with words. She has a Bachelor of Arts in Art History degree from Swarthmore College and an M.B.A. from the Stanford Graduate School of Business. Sabrina is the younger of the two and has twin boys Alex and James who are 5 and William who is 2. 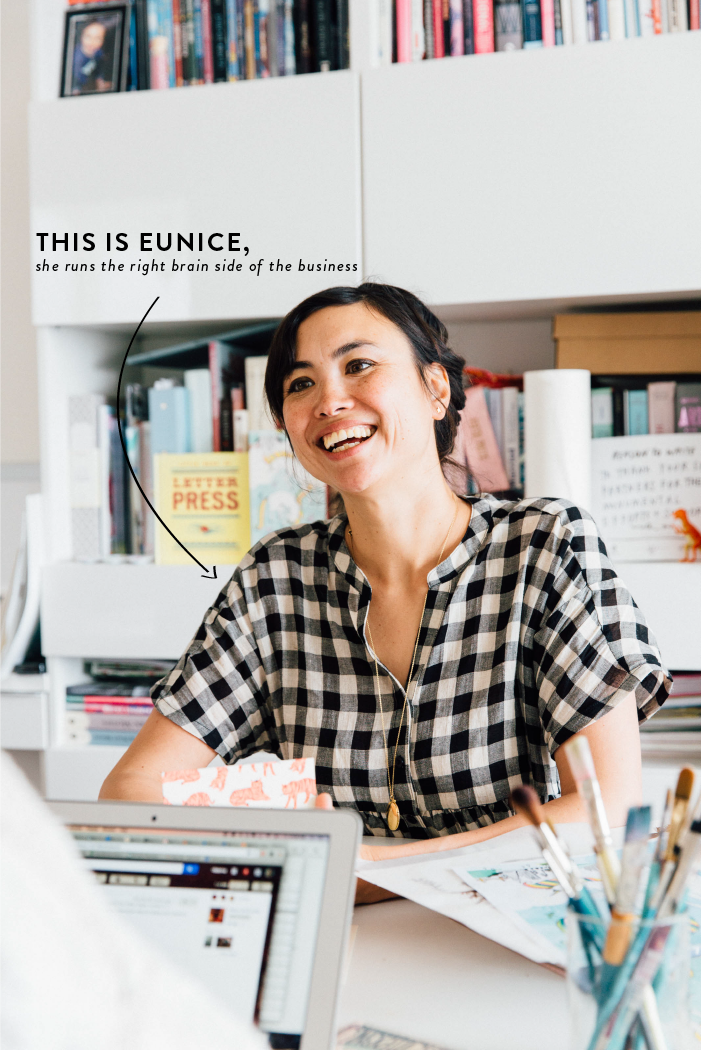 Eunice (whose also a good friend of Liz) runs the right brain side of the company. That means she spends her time designing, illustrating, and creating. She has a Bachelor of Fine Arts degree from Pacific Northwest College of Art and an Associate in Arts degree from the Fashion Institute of Design & Merchandising. Eunice has a son, Jude, who is 5 and a daughter, Imogen who is 1 1/2.
Keep reading to hear about what they fought about growing up and who the karaoke queen is…
Produced and written by Ashley Aikele. Photography by Ashley Batz.
Eunice, what kinds of things did you like doing together when you were growing up?

Our mom was not big on providing coveted toys like Barbie Dream Houses so it was up to us to get creative.  One of my favorite memories is of building our equivalent of the Barbie Dream House out of a dining room chair.  We made beds out of Kleenex boxes, curtains from scrap fabric, and even tiny china from cardboard painted with Delftware inspired patterns.  Barbie’s car was a roller skate – she was not, as I recall, a terribly good driver!
We grew up in Asia and our play was colored by our experiences.  We were entrepreneurs from an early age – I remember very clearly turning a bedside table into a night market stall, hawking bad disco outfits and tiny plastic shoes.
We would also collect things from around the house, like, say, our mother’s wedding ring, and selling them back to our parents.  Overhead was low – I’m pretty sure we made a tidy profit! 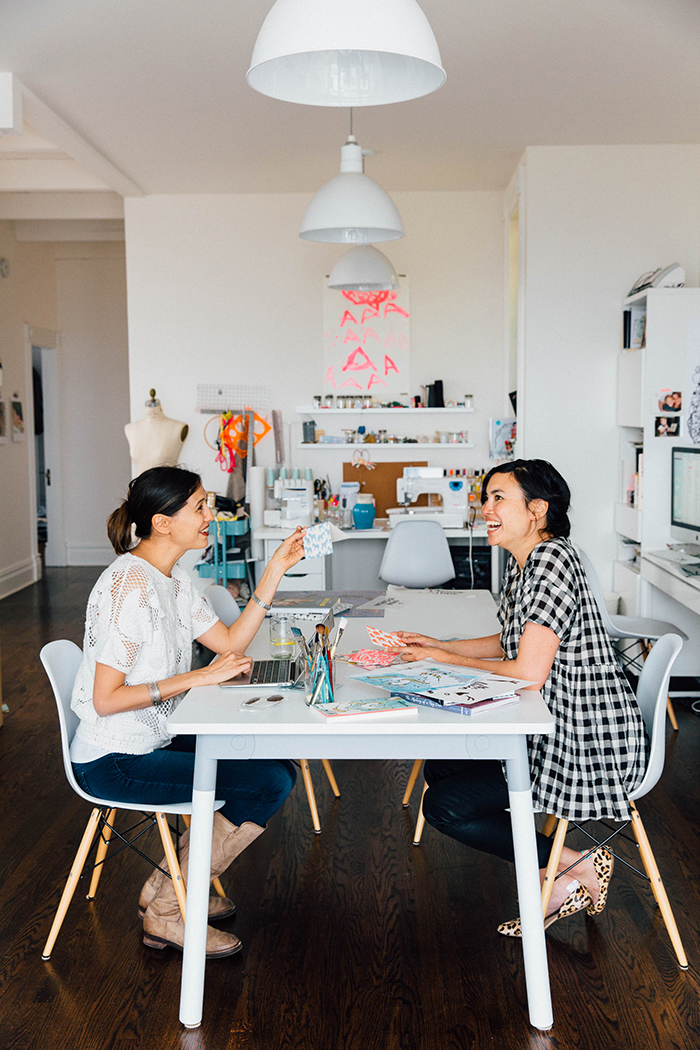 Sabrina, what kinds of things do you like doing together now?
Most of the time we spend together is at the studio, so working and brainstorming new cards!  When we do have a chance to step away from work and our families we like to go shopping together or have a leisurely lunch!
Eunice, were you close growing up? Are you closer now or then?
We were really close – we grew up moving every 3 years, so we were each other’s first and best friends until well into middle school.  After that and into high school and college we went our separate ways for awhile but then Hello!Lucky brought us back together again!  Now we have 5 kids between us and a business in common, so there’s lots to talk about! 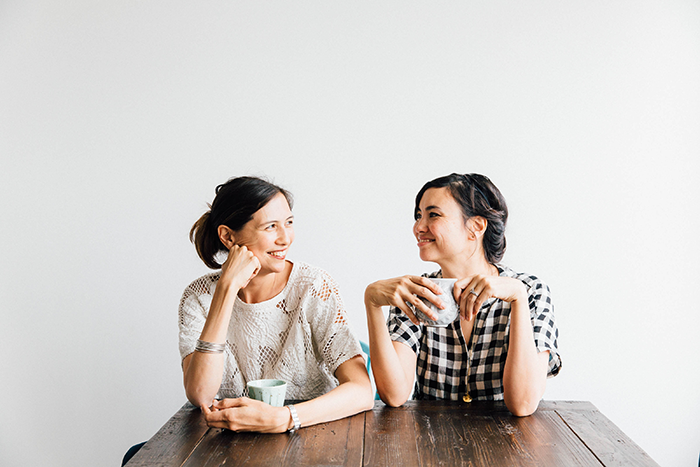 Sabrina, what is one of your favorite childhood memories together?
One of my favorite childhood memories is making our own version of the Barbie Dream House, which Eunice talked about earlier. Another favorite memory is playing dress-up in our mom’s clothes and costume jewelry. She had a amazing collection of 70’s numbers – a floor-length black gown with peacock feathers printed on it, feather boas, sequins clutches, giant sunglasses. We used two foam balls as boobs.
Eunice, what did you and Sabrina fight about growing up?
Arbitrary stuff!  In the way of kids, we were really tight but at the same time sort of frenemies – one minute you’re getting along great, the next it’s the end of the world over something completely ridiculous!  I remember fighting over a couple of seahorse shaped combs – one was red and one was green – and for some reason, everyone wanted the green one.  I think on one hand our parents had it easy because as a duo, we entertained ourselves but we also drove, our mom, particularly, nuts with our random knock down, drag out fights! 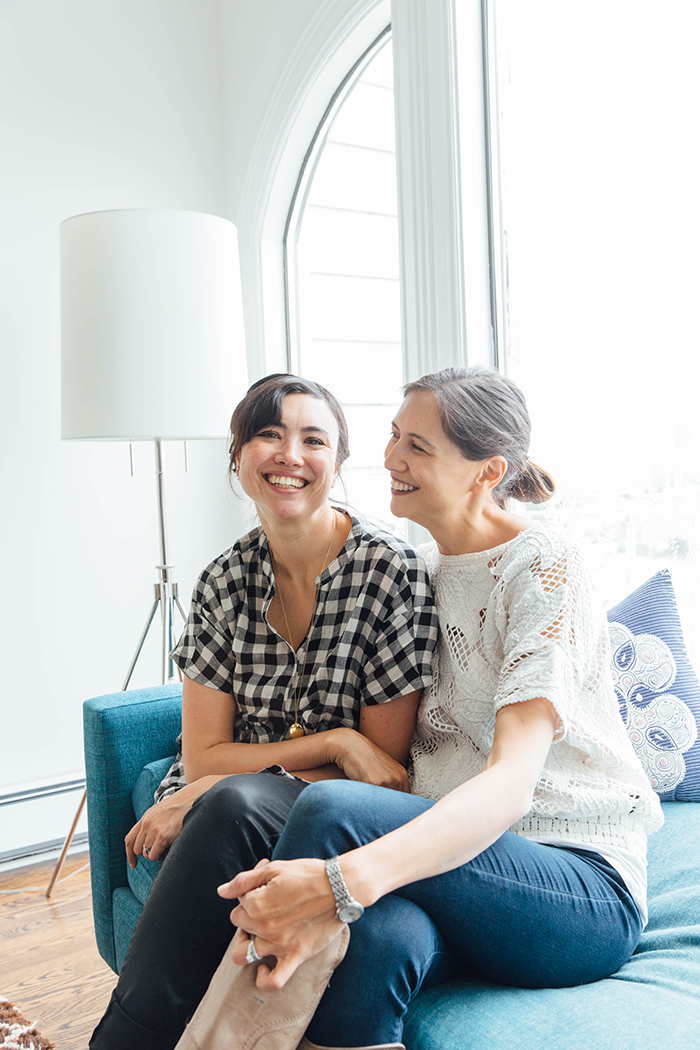 Sabrina, what’s one thing that used to drive you crazy about Eunice when you were growing up?
Eunice was always super stubborn when she decided she wanted something a certain way.  This used to drive me nuts, but now I see it as a strength — she’s a visionary! And she’s become much more flexible over time!
Eunice, what’s one thing that used to drive you crazy about Sabrina when you were growing up?
She was wily – I am and, have always been, a much simpler and not terribly strategic person.  Once, we were fighting over a red vs. green postcard book (everyone, again, wanted the green one).  We fought and fought and, finally, I thought I had won the battle – Sabrina seemed to have finally come around and given up, only to discover, on returning to the book a few days later, that Sabrina had written, in permanent marker, “SABRINA’S POST CARD BOOK” on the inside front page.  Like I said, super wily. 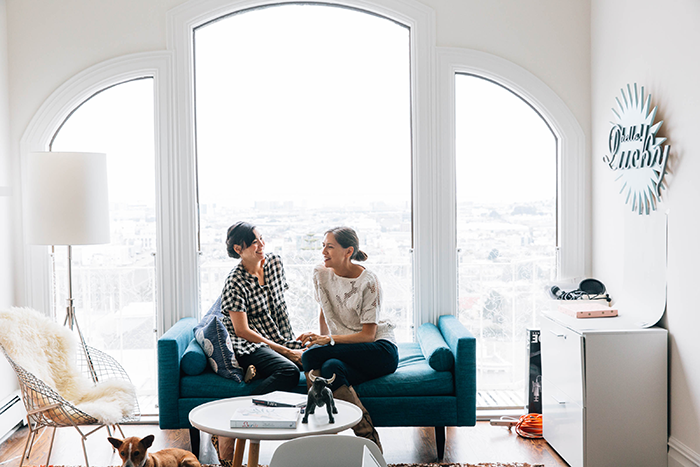 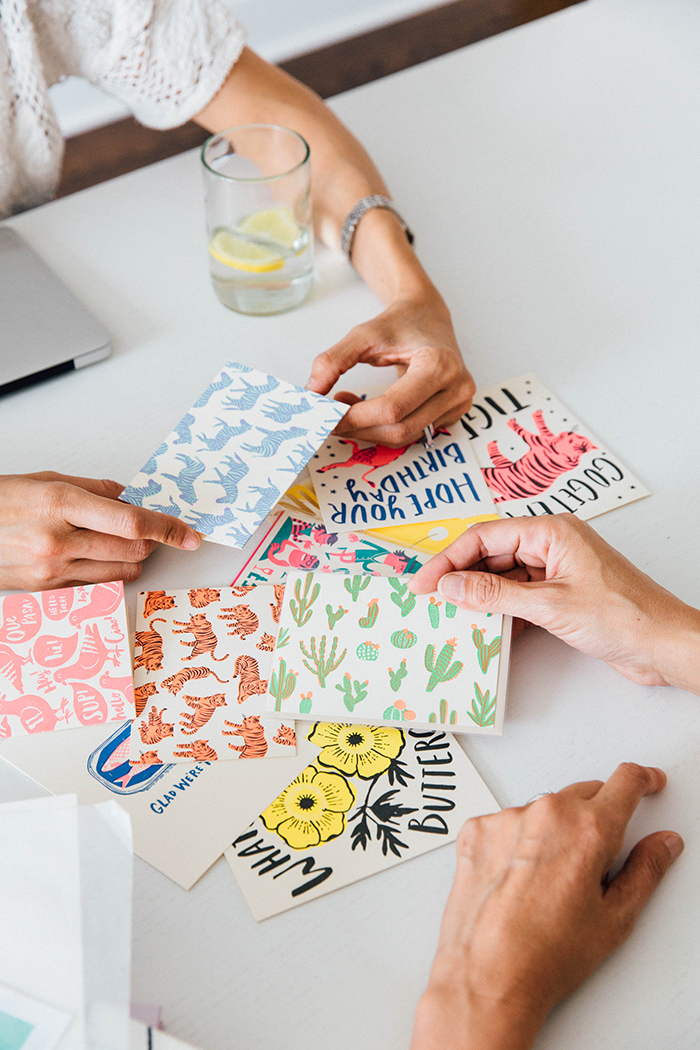 Sabrina, what’s a quality or skill Eunice has that you really admire?
Her creative eye, irrepressible positivity, and the fact that she seems to need no sleep!
Eunice, what’s a quality or skill Sabrina has that you really admire?
The ability to think on her feet and respond articulately and intelligently when put on the spot.  Master of both the pithy and meaningful response. 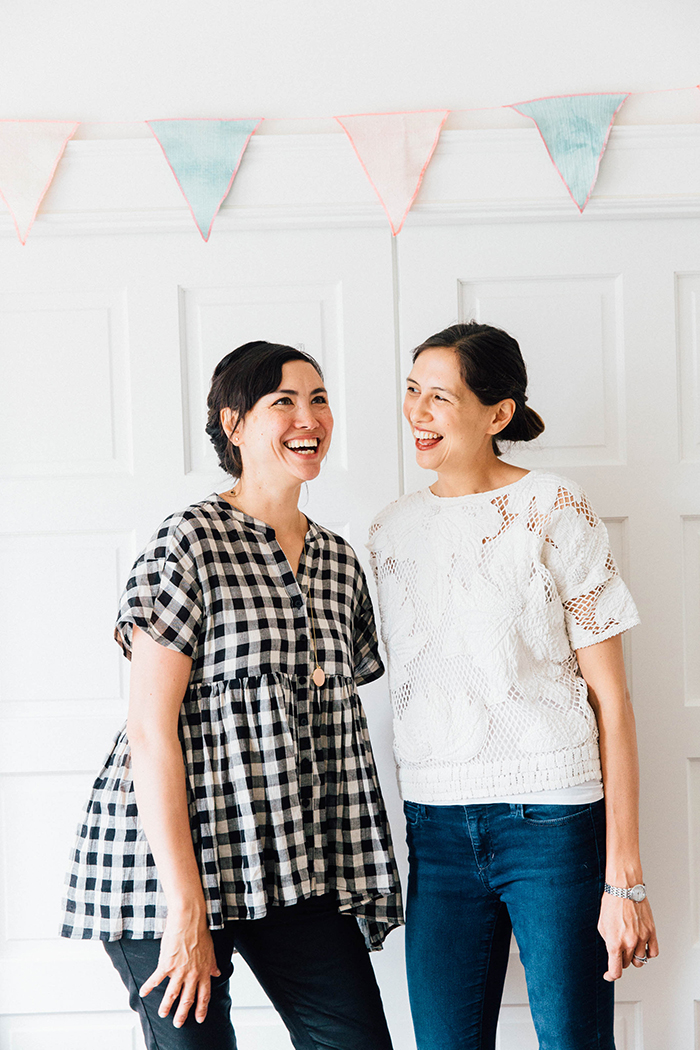 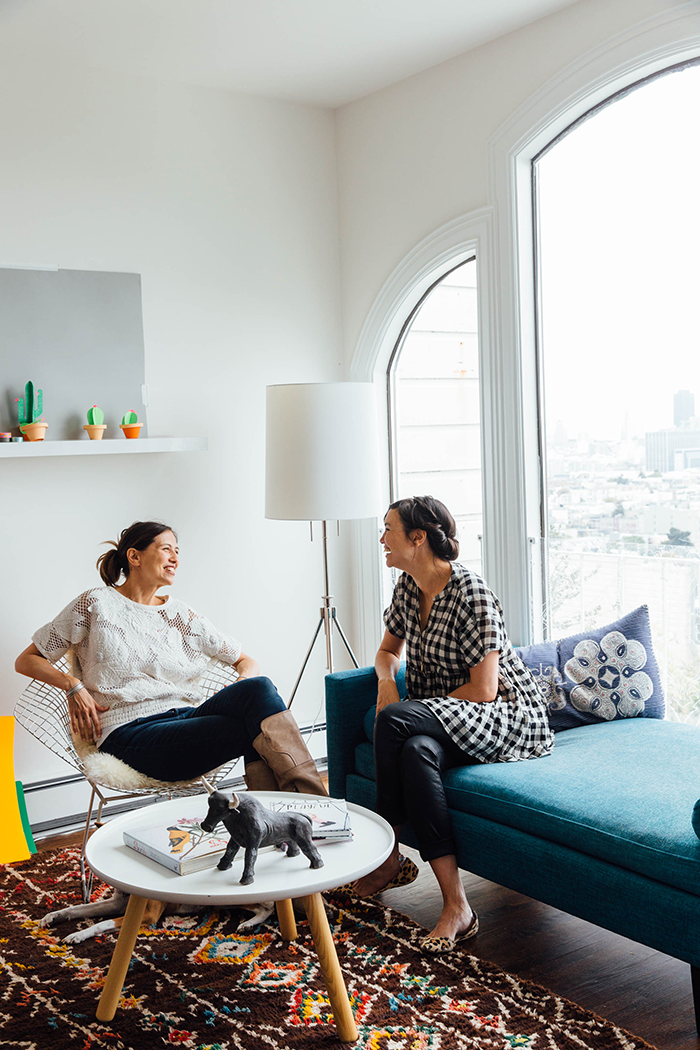 Tell us one way that you two are a lot a like and one thing that is totally different about you two?
Eunice: We are both very creative and visually minded – I have the design and illustration skills, but Sabrina is also a great art director and has a really good sense of design.  Sabrina is, however, way more left brained than I am – she’s good with numbers and strategic planning and that kind of thing.  I always joke that my left brain is about the size of a raisin – it’s all in my right brain – and that it’s surprising to me that I don’t walk in circles.
Sabrina: Agree with everything Eunice said, except that she is way more left-brained and good with numbers and strategy than she gives herself credit for!  Also our voices sound identical, but she snorts more than I do when she laughs.
Sabrina, how would you describe Eunice’s style?
Organic, boho, French meets Japanese.
Eunice, how would you describe Sabrina’s style?
Modern and minimalist with lots of organic feeling textiles and a glamorous edge. 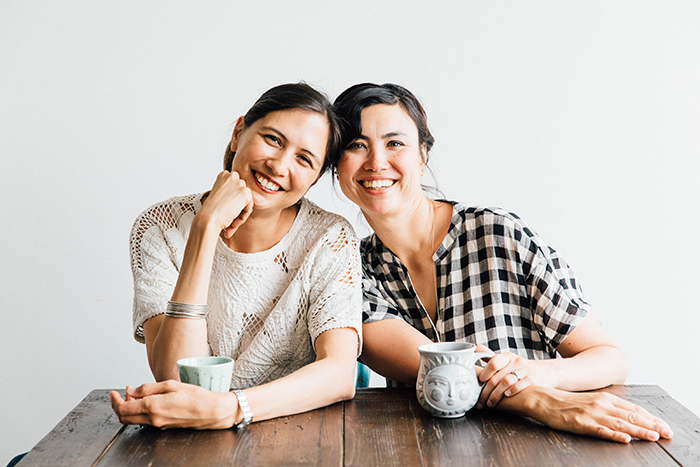 What is one thing your sister has taught you?
Eunice: Have confidence in yourself and your skills, and there’s no shame in being proud of your accomplishments
Sabrina: You catch more flies with honey than with vinegar!  Have a positive attitude and always be nice.
A huge thank you to Sabrina and Eunice! Aren’t they amazing?

LOVE this series and these sisters are so awesome, what a talented duo!

Love that gingham top! Any idea where it’s from?

My New Favorite Pair of Jeans