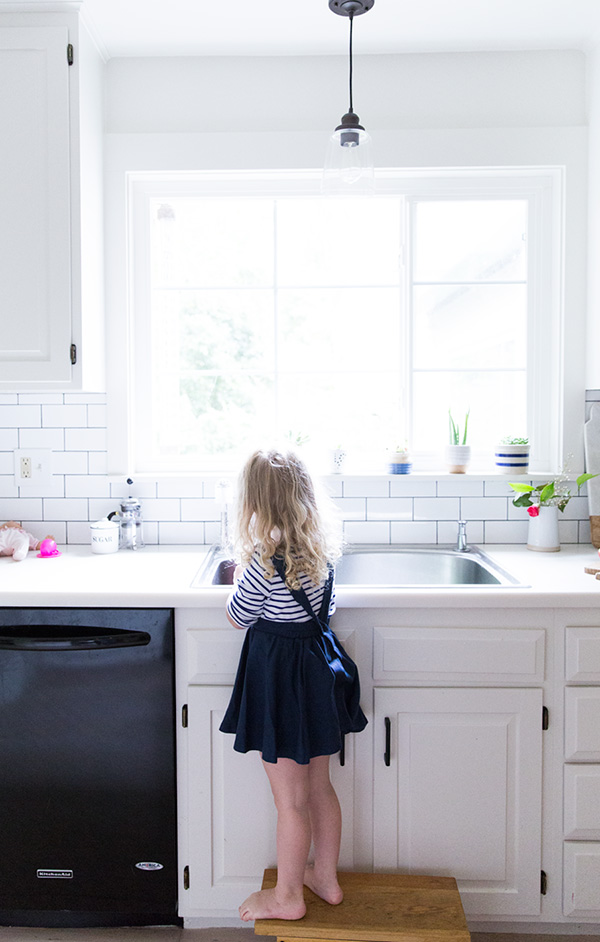 This past spring we bought the home we’ve been renting, and the first thing we did was give the kitchen a big refresh. Here’s way more than you probably want to know about it (and lots of before/after pictures!)…

Before pictures. The two pictures below was the home when we first moved in as renters last spring. The appliances were updated and great, but the general darkness of the cabinets, floors, and wallpaper felt dated to us: 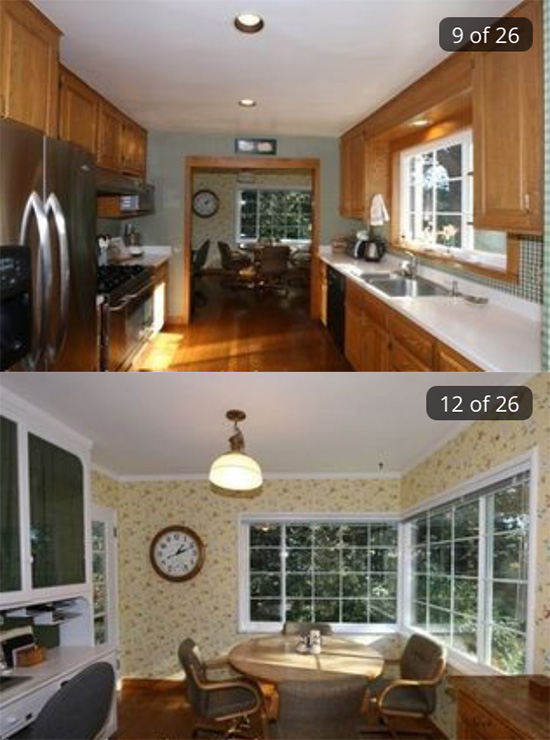 The first thing we did upon moving in was painting it white (Benjamin Moore China White) over the wallpaper. Which helped a lot: 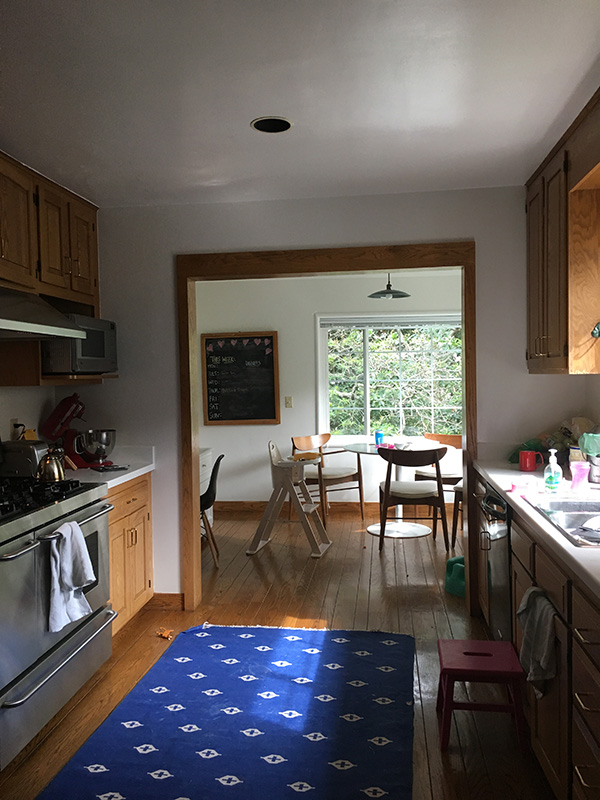 We were still really itching for more light though. So, when we purchased the home at the end of March this year, the first thing we did was a refresh. Although it’s a huge change, I hesitate to call it a remodel because we kept our existing cabinets, counters, and appliances (which saved us a whole lot of money to not replace those right now). We just wanted to brighten up what we had there already since we didn’t have a huge budget to work with.

Here’s what we did:

1. A whitewash floor over the existing red oak

2. Built a pantry (since the kitchen didn’t really have one)

3. Painted all cupboards and trim white

4. Added subway tile for a backsplash

6. Removed the wood box above the kitchen window and added a pendant light

I’ll talk more about each of those specifically below: 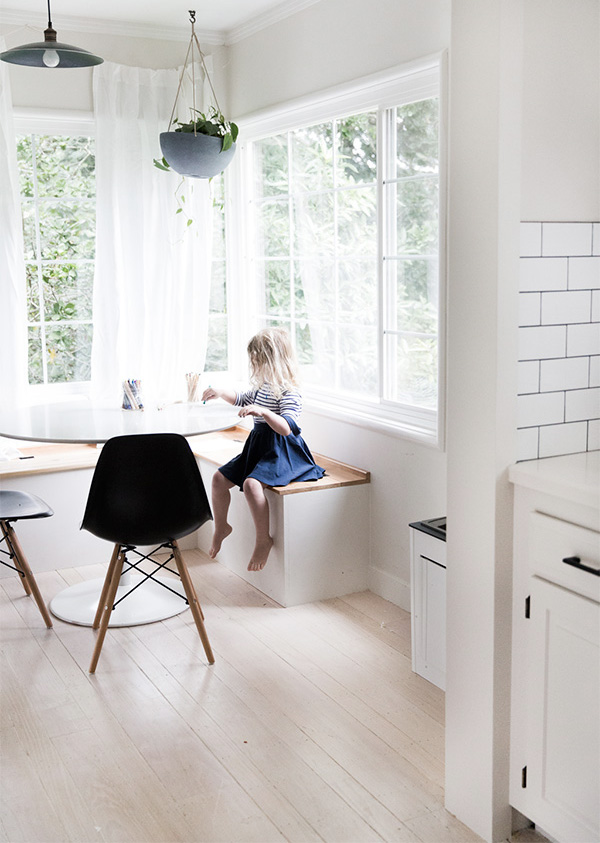 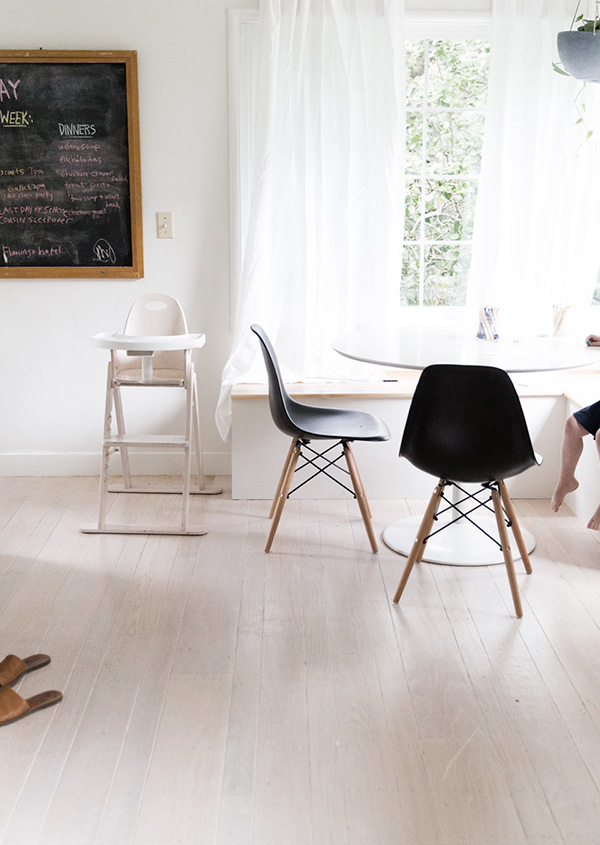 So, as I mentioned, we were really anxious to get working on the kitchen refresh and ended up starting 4 days after we closed on the home. It wasn’t because we were that anxious to get it done, it was more practical than that. That week was Henry’s spring break and our painting company said we had to be out of the home ideally for about a week so it really was either now or during summer vacation.  So, we let the painters in and then shortly left for Sonoma for a week (our post about the trip here). It made me nervous not watching the process, especially since I had a very specific idea on what the floors should look like. After they sanded the red oak, stripped the floors, and did a whitewash stain, I came home to see what it was like before they put the sealant on. And it wasn’t totally what I wanted: 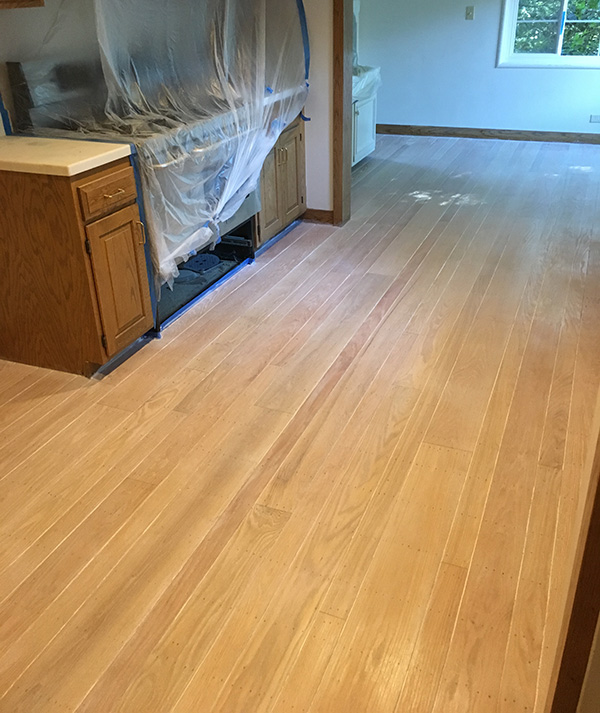 They were light for sure, but not white enough, and a little pink. I thought I remembered my sister in law Gabby of Design Mom doing a post about it so late that night I read through it and started panicking myself! So, the next morning with this Remodelista tutorial bookmarked on my phone, I ran to the paint store to get green tint, white paint, and mineral spirits. I told them we needed to actually add a layer of watered down white paint on top to make the floors even more white, and they were totally cool about it. Below is Javier experimenting with how much green tint to add in to counter the red in the oak. I was nervous for sure (did not want green floors!). 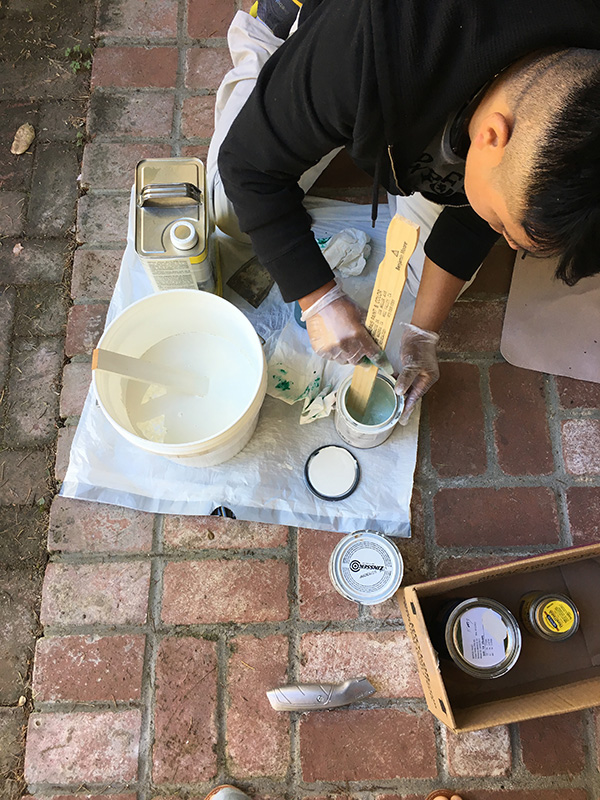 We tested the spot under the fridge since you wouldn’t really see it anyway, and it looked great. So a after a coat of watered down slightly green tinted white paint, here’s what they looked like: 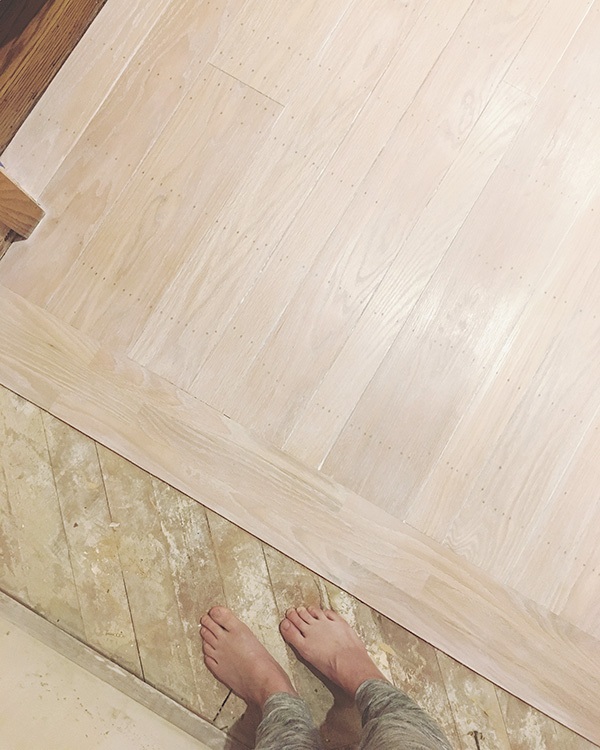 Good, great! (FYI I’m standing in the part where the pantry will go if you keep reading for that part). They did a coat of sealant on top of the watered down paint as well. I was happy with it! The one mistake I did do as I walked out the door and headed back to Sonoma, was instructing them to do two coats on the boards that were darker. There were a few boards that were much darker (you can see a couple photos up) and didn’t really match the other wood. It turned out those boards ended up being way too white and it really bothered me for a few days, but now I don’t really notice it anymore. 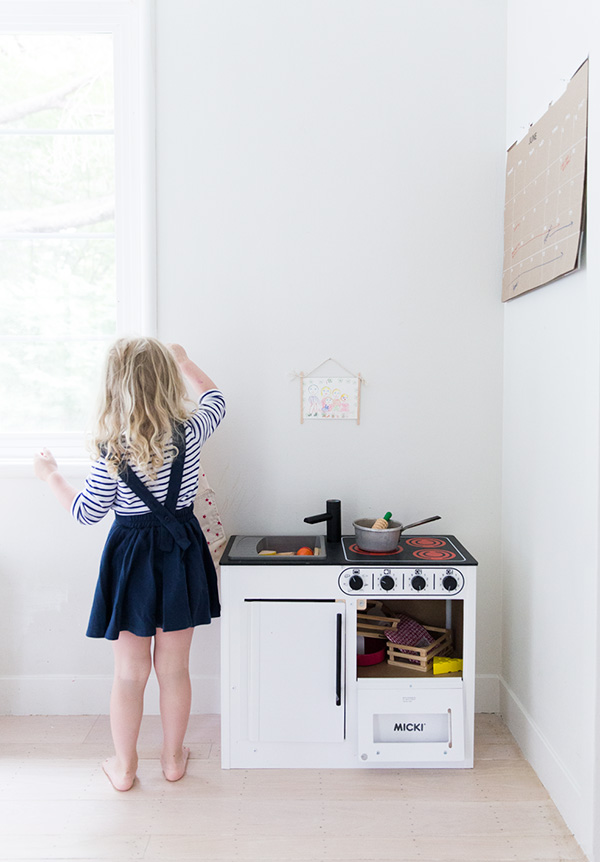 Our Scandinavian whitewashed floors! I love them and they really brighten up the room. 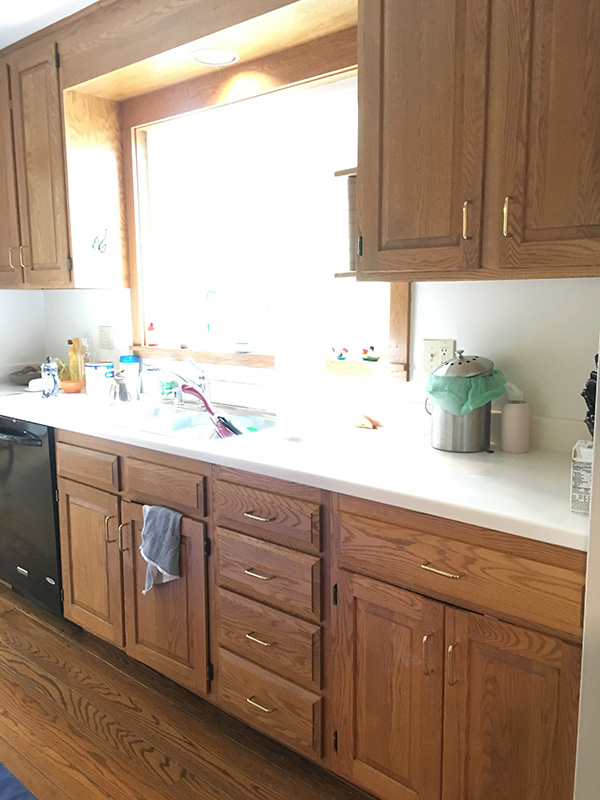 Painted cabinets, subway tile and hardware (see before picture above).  After the floors, which took about 5 days, the painters moved on to the cupboards. We decided to paint them the same color as the walls: Benjamin Moore China White. I was tempted to go even whiter, but I was nervous that if I did, the walls would look yellow in comparison. So we went with the same color and I’m so glad we did. Our painters used a professional paint sprayer (not hand painted) and they turned out really nice. If you’re looking to paint your cupboards, I think the sprayer is the way to go! One day I’d love a more simplistic design for the cupboard doors, but really happy with how these turned out and it saved a ton to use our existing cupboards. 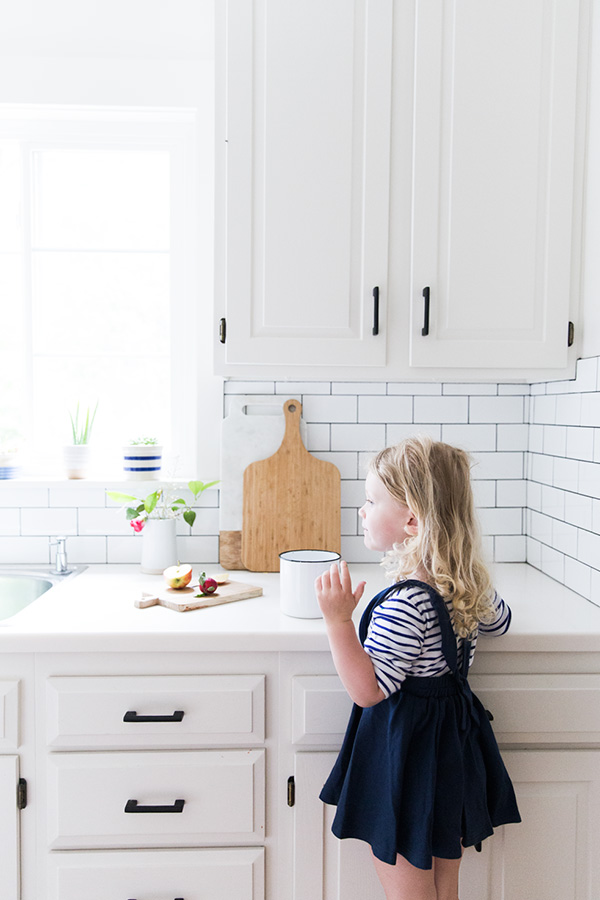 We switched out the hardware with a modern, black pull. Most of the ones I liked were the wrong size for our holes (which is so frustrating!), but I lowered my expectations a bit and we finally ended up buying these black ones from Build.com that I actually really like. It was very easy putting them on, and makes such a big difference. One afternoon a couple weeks ago Henry and I did them all in about an hour. 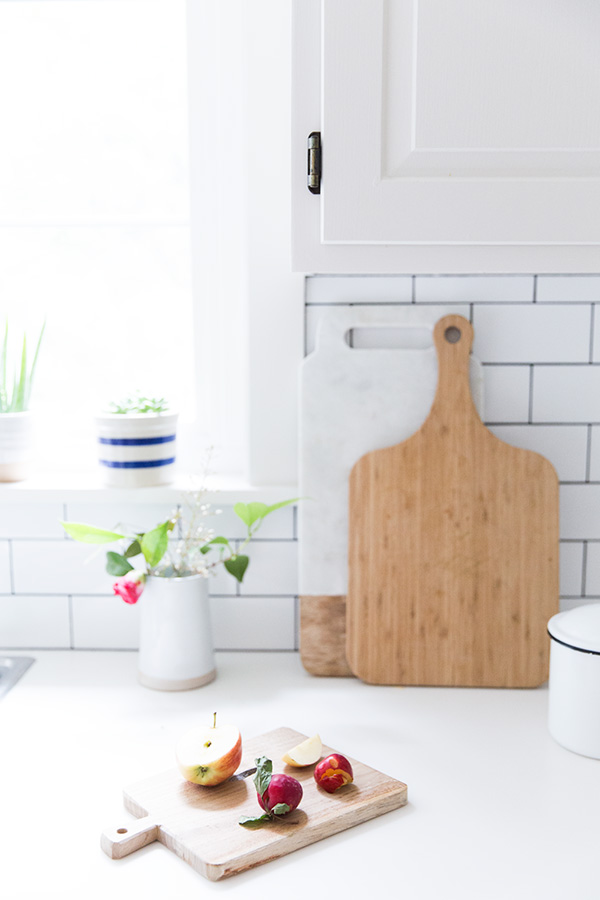 I think the subway tile is the smallest project that makes the biggest difference. I love how it looks. The graphicness of it makes the whole space feel really modern. We used the darkest grout available, and bought the subway tile from Amazon. 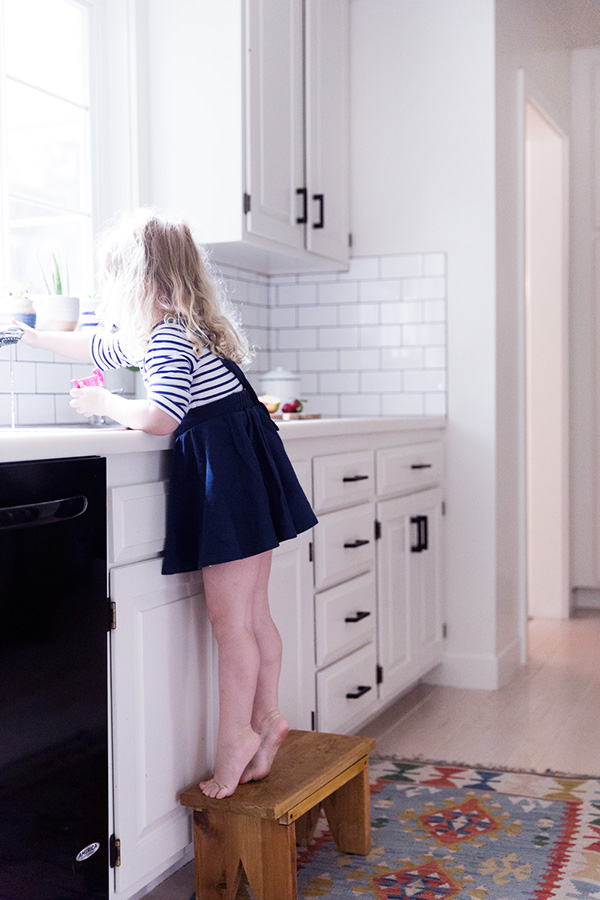 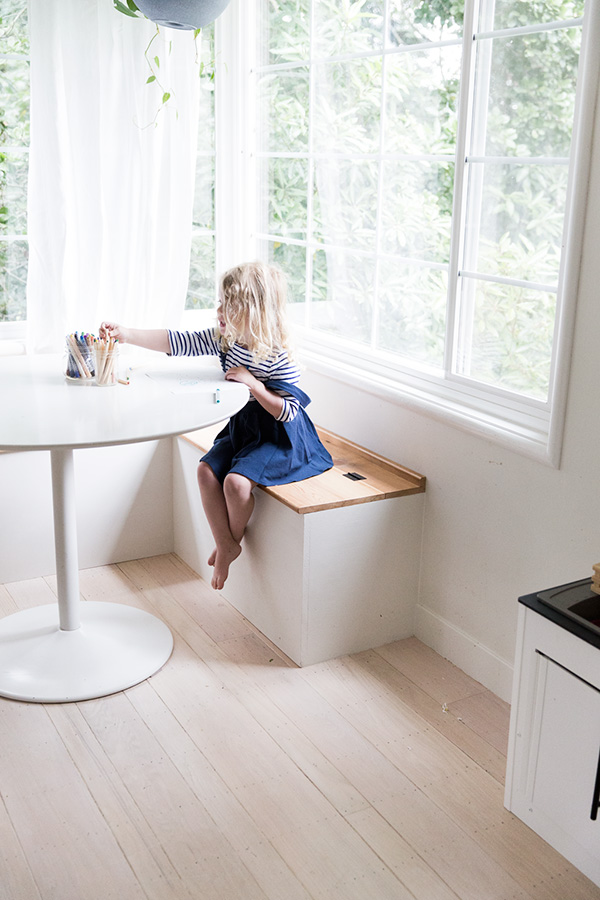 Custom window bench. Our good friend Phil is a really talented woodworker in Redding, and came down one weekend to help build this window seating for us that has storage underneath. It turned out so nice! 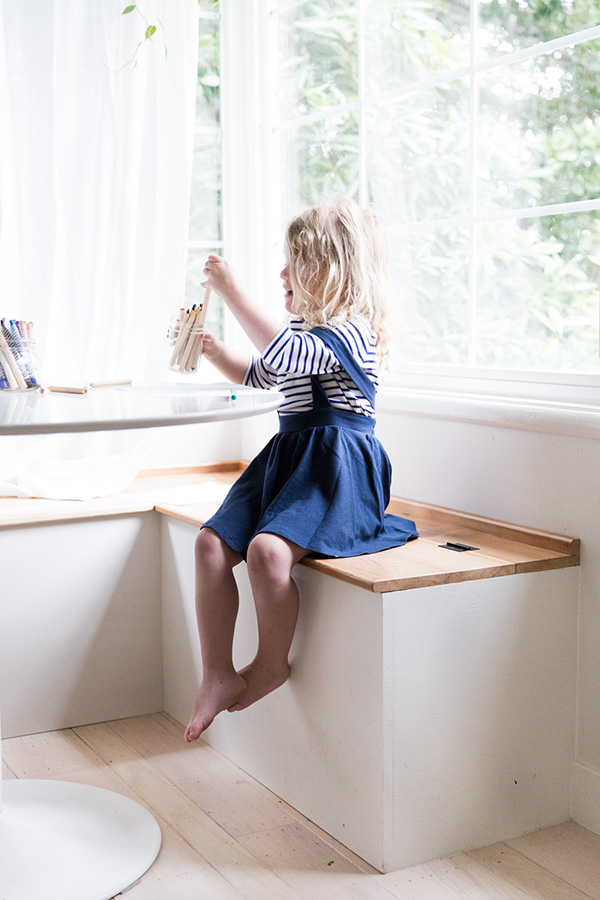 I really wanted our kitchen to feel more cozy and a place we can hang out, so window seating seemed like a good idea for the corner breakfast nook windows. 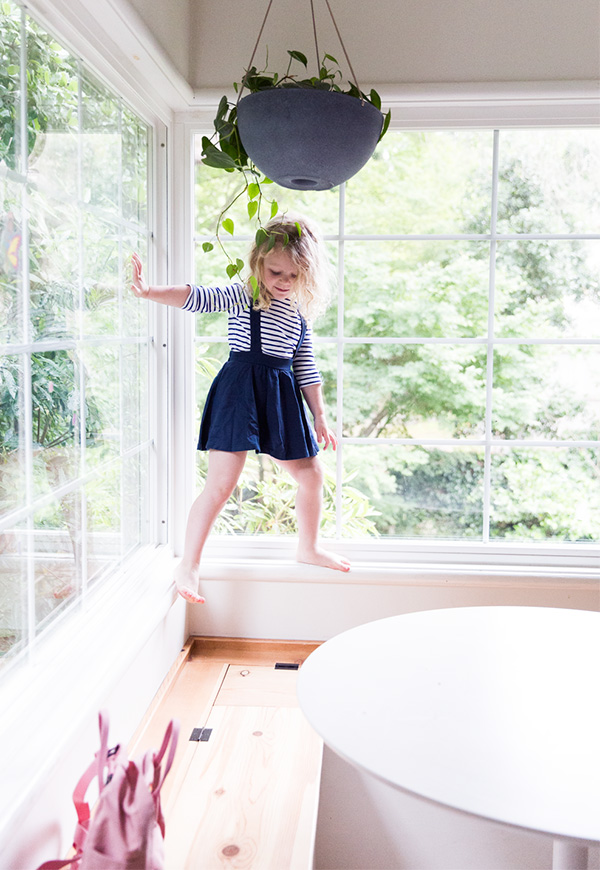 Phil (with Jared as his assistant), built this in one day, and then painted and added hardware the second day. Pretty amazing and it’s super sturdy and custom. Now I’m just on the hunt for a more rectangular table. I keep on changing my mind from wanting to stick to the white, or get a wooden, vintage cottage table. What do you think? 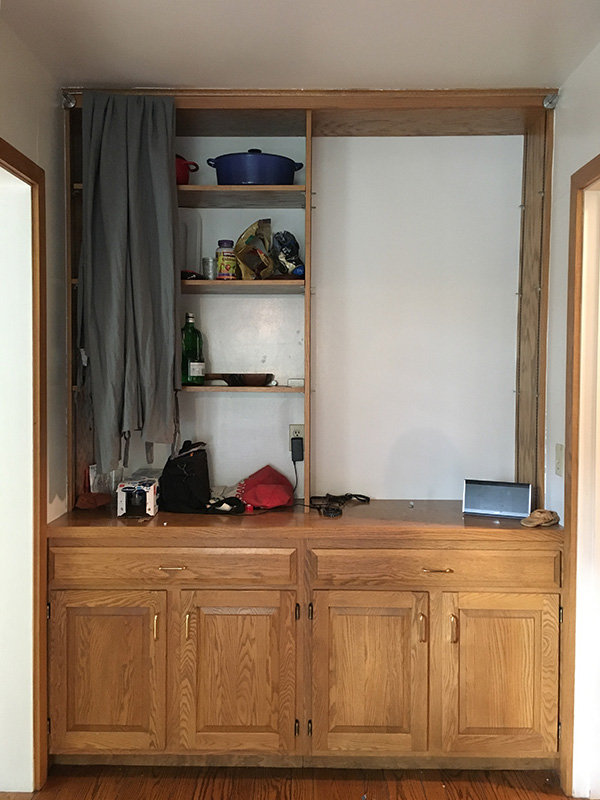 Pantry (see before picture above). Oh man, this picture above still stresses me out! This was our awkward dark opening shelving we had for a year (and honestly, this is the more cleaned up version of this space) because at one point, I was so sick of all the clutter that I just removed the shelving so I wouldn’t be tempted to throw anything up there at all.

We considered just painting it all white for open shelving, but we didn’t have a pantry in the kitchen and really needed one. All our pantry items were in those lower cabinets and the kids were always getting into stuff. So instead… 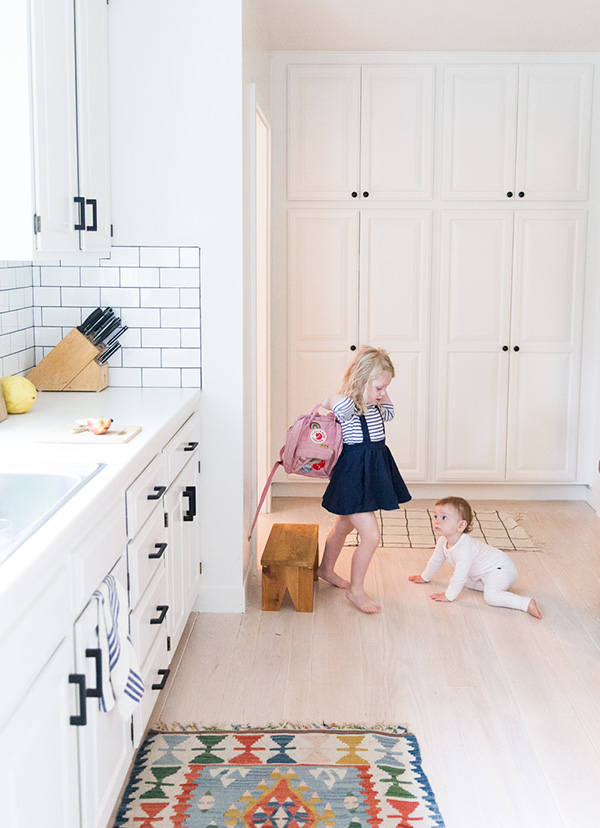 We had a custom pantry built in its place! The Rurkish rug from Etsy, geometric rug from Urban Outfitters. 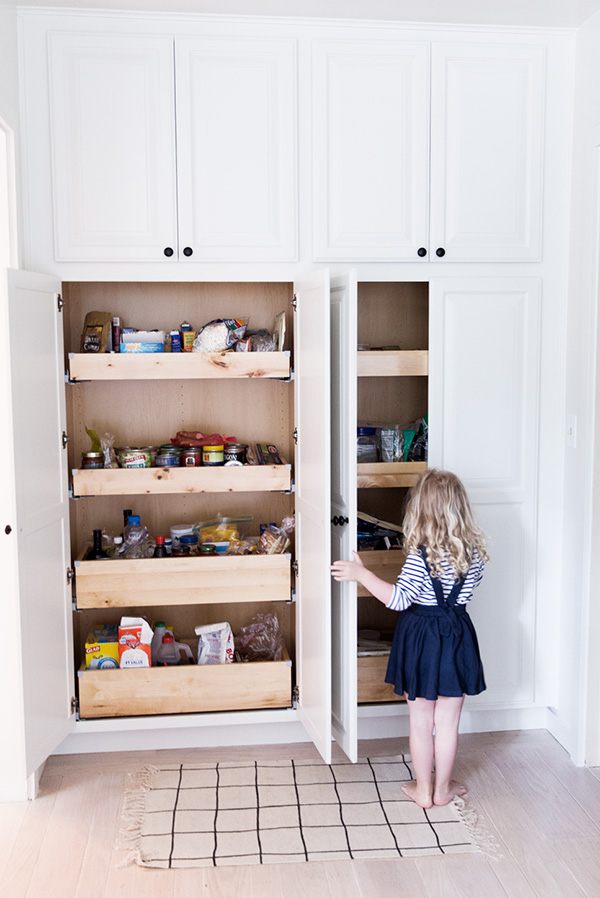 We used a local cabinet company and they did a fantastic job from design to installation. I don’t have a picture of the inside of the upper cabinets but they’re just shelving for large appliances and vases, etc. Oh man, it is SO nice to have a place for everything now. And those roll out drawers are game changers! 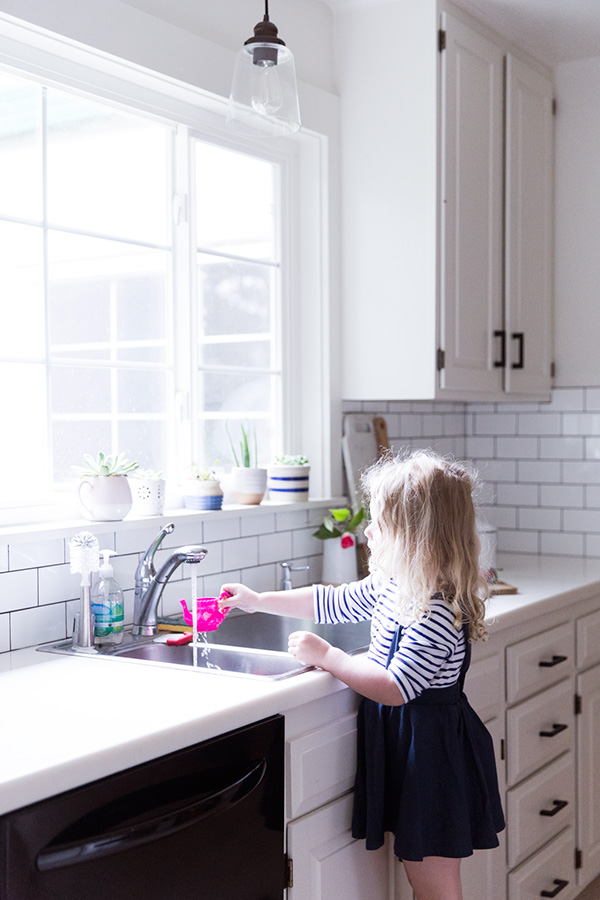 The pendant light above the sink is from Wayfair (on sale now!). Once we decided to go with black hardware, I knew I had to keep the pendant black as well. All the white and black feels very timeless, and not too modern looking. 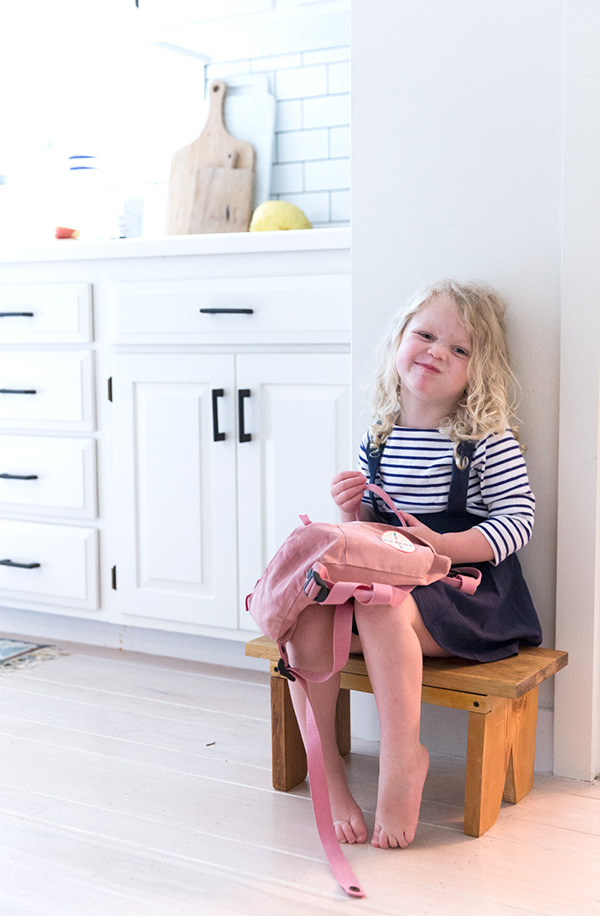 That’s it! We’re all super happy with our new kitchen. Amazing how much more enjoyable it makes meal prep to have a space I really like to work in.

It is looking very nice in these photographs and foremost that girl is so cute, thanks for sharing this post.

If you’ve read my blog, you’d know that I’m so obsessed with white-coloured interiors. And your kitchen – it’s my dream kitchen!

It is so refreshing to see a kitchen that is not a part of great room. I prefer to be in my living/family room, and not have to see the kitchen.

Not to overstep, but at some point would you be willing to ballpark the costs or even break it down for us on a separate post? We are looking to buy currently and will likely need to do a ‘refresh’ instead of a renovation as well, but don’t know how much money to set aside for that. Great post, definitely bookmarking it for our near future.

Hi Lauren! I did consider adding prices, but I thought because we’re in the bay area the prices would all be inflated (as everything is here) and might not be applicable to everyone. If you’re still interested, email me and I’ll share!

It is totally beautiful!!! Your ideas were great and the execution was awesome. Thanks for the detailed posting.

We recently upgraded ours to all white and I love it! It’s been the greatest home decision we ever made. I keep thinking the thrill of it is going to wear off eventually, but every morning when I wake up, I keep thinking, “This is the best thing we ever did to this house” and it’s the best feeling ever.

this is a great transformation!! is that a slider or door to the exterior between the kitchen and pantry? also, were the floors sealed after the whitewash? thanks!

How to Wrap a Bouquet of Fresh Flowers (And a Secret Freshness Trick!)