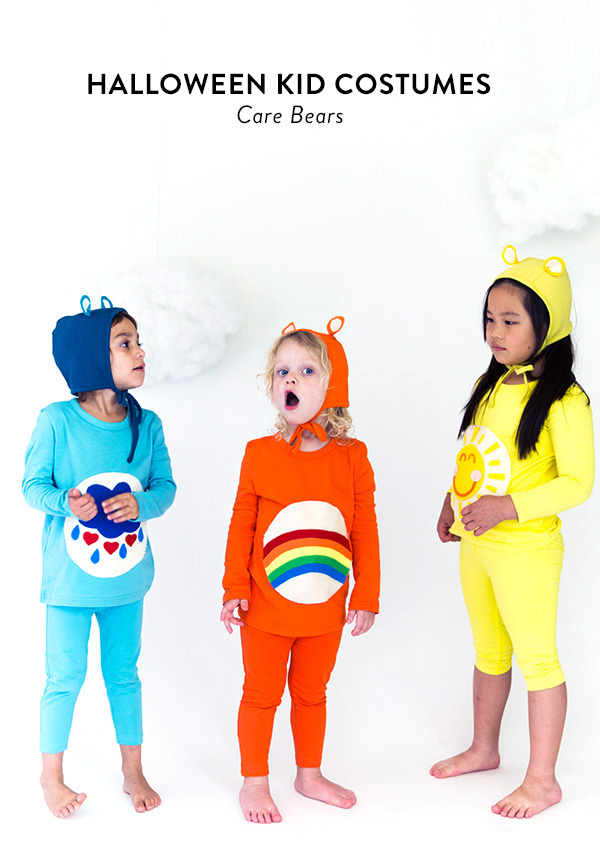 Continuing with our series on Halloween costumes, we’ve got a set of three Care Bear costumes today! We’re all about nostalgic, classic costumes so naturally Care Bears were top on our list. This is a great group costume for a family, or group of friends. But you could also just choose your favorite bear and grab a Care Bear buddy to take along! 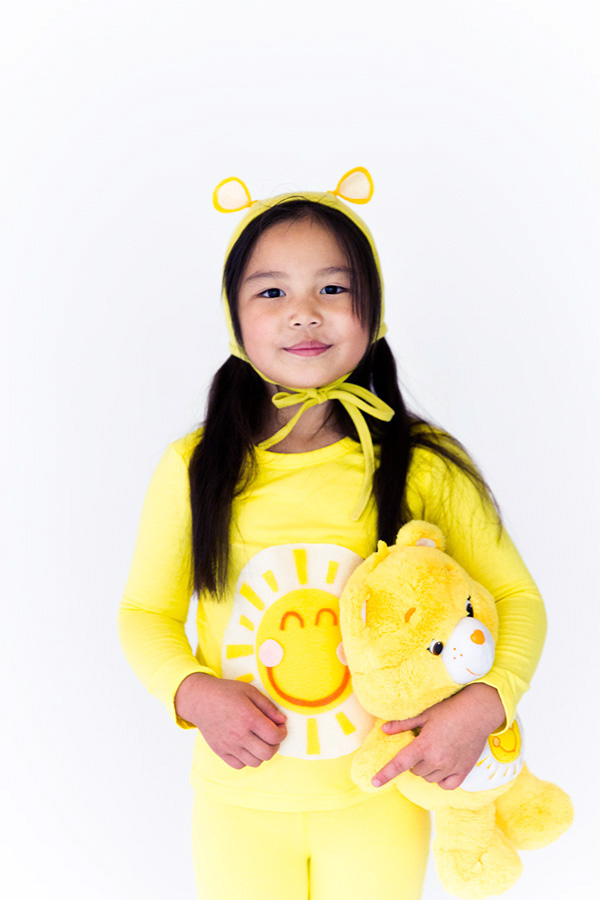 Here are some details on putting them together… 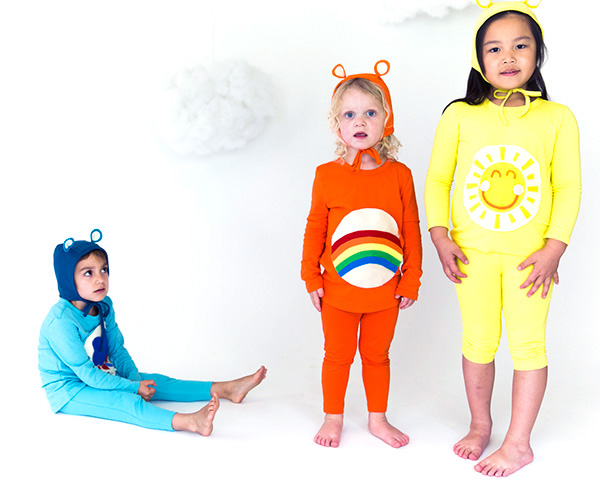 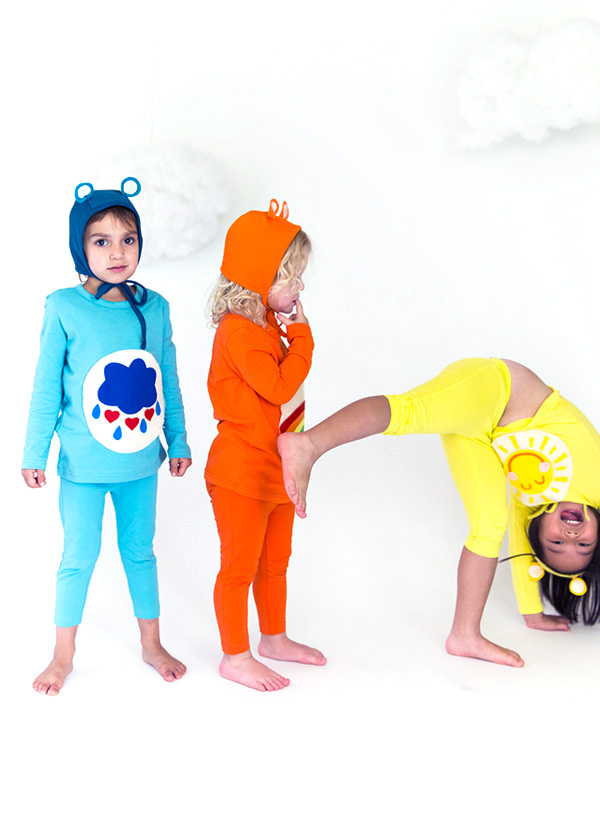 Start with matching, plain shirts and pants. We found some great options at Primary.

Then we added some felt detail for the tummies, using the actual Care Bears as inspiration. Felt is my favorite thing to work with for Halloween costumes because you don’t need to sew! After cutting out the pieces, you can use either a glue gun or some Fabri-Tac (which is my new favorite thing to use with felt!) to attach it to the shirt. 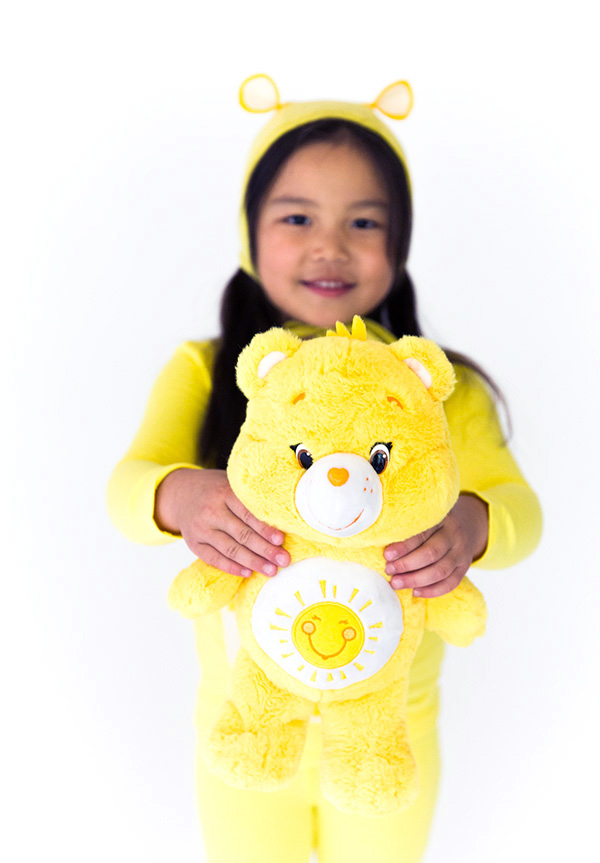 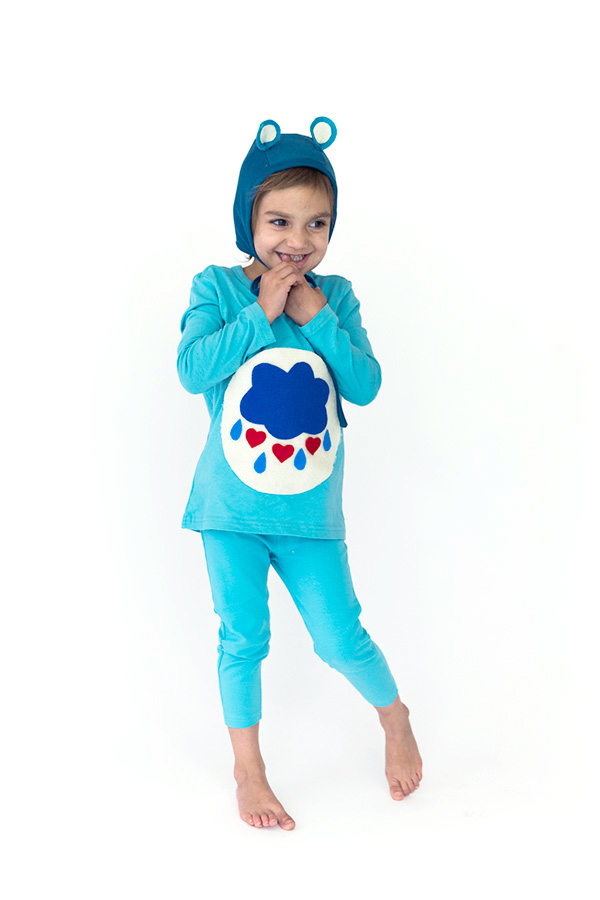 Now for the hats! There are a lot of tutorials out there for making a simple pilot’s cap if you sew, or know someone that does. We chose some matching fabric for each bear. If you’re not feeling inclined to sewing, I’ve seen pilot’s caps sold in an assortment of colors on Amazon. Don’t worry about them matching perfectly. We like the hats being a little off (like the blue one above), but of the same color family. 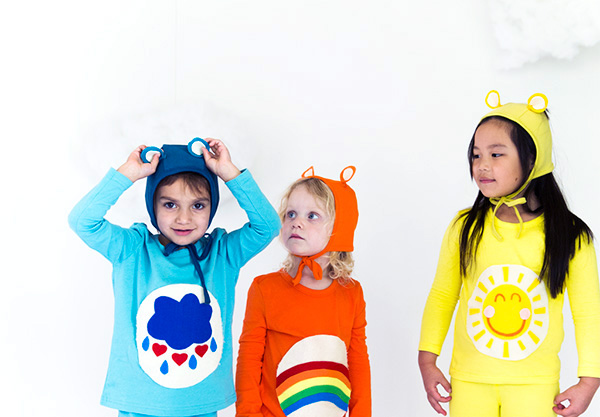 Then we added felt ears on. Here’s how those were made: 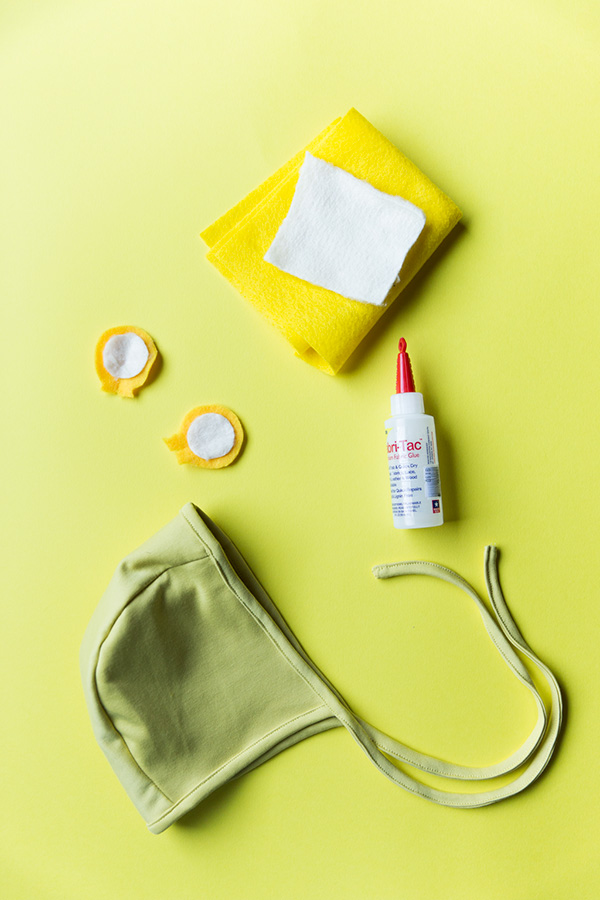 We cut small round circle in a corresponding color, with a tab and slit at the bottom, as seen above. We added a small white circle in the middle as well. 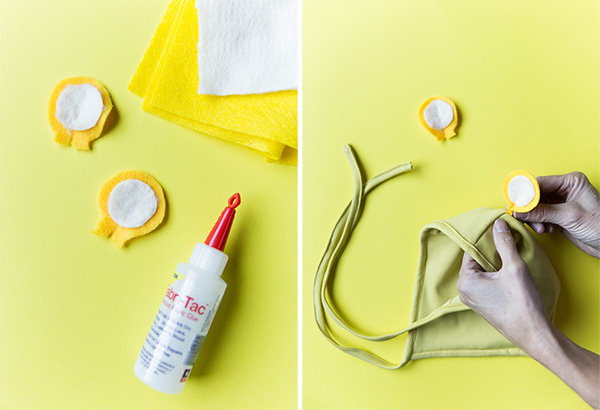 Then we pinched and glued the pair of ears onto each hat, or you can do a simple stitch (which is easier to remove if you want to use the hat again). 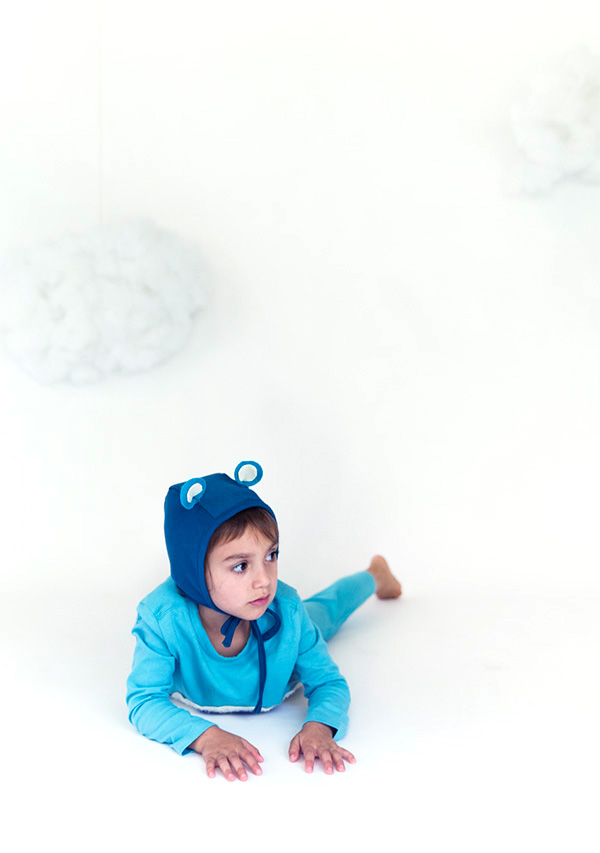 Make sure when you glue or sew them on that they’re sticking out at a slight angle. 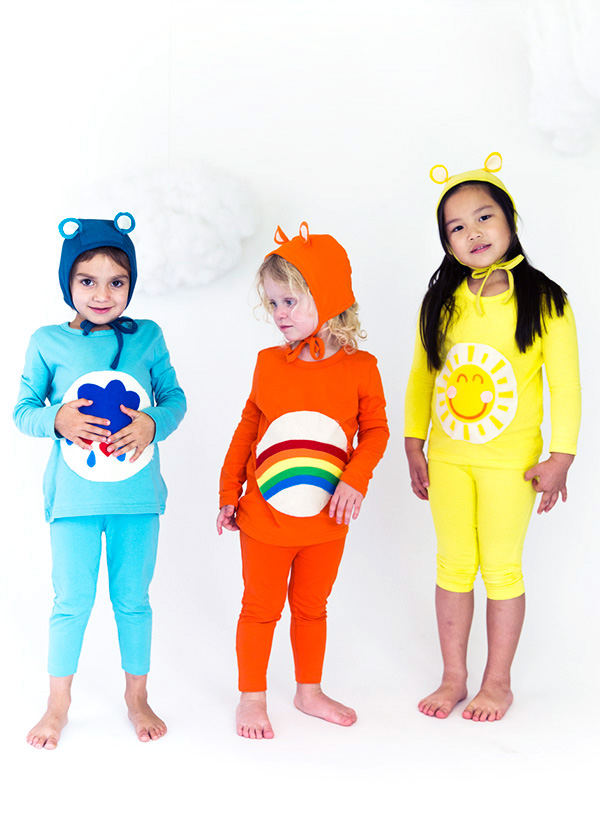 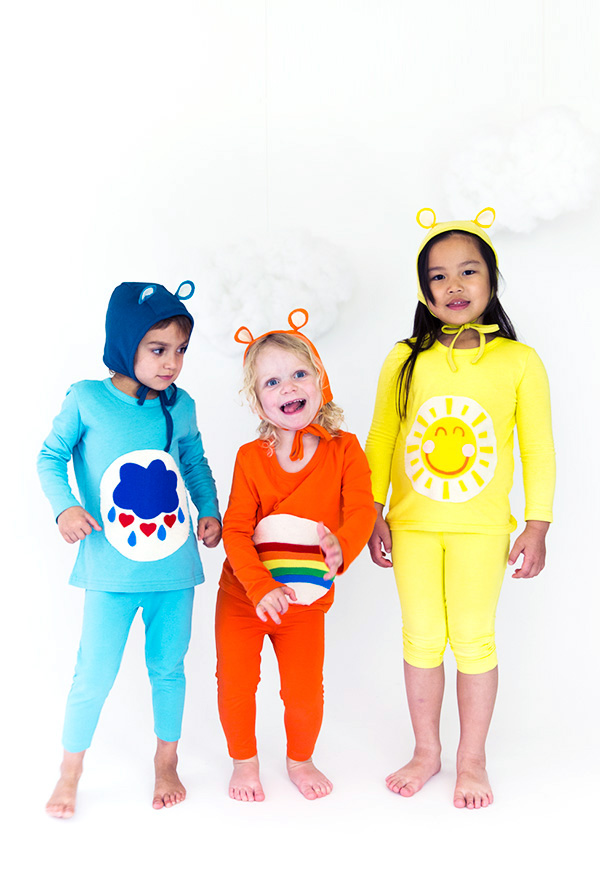 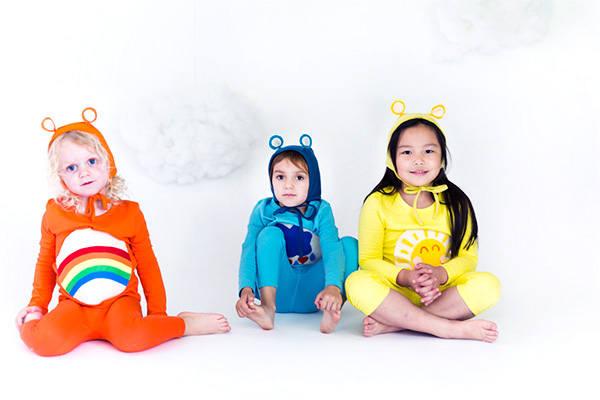 Photography and creative direction by Liz Stanley. Crafting by Gaby Viglas who made the tummies and ears, and Judith Chasova who made our hats.

ahhh i’m DYING this is too cute!

These are adorable! But I don’t think my kids even know what care bears are haha!

These are great! They reminded me of some care bears costumes I saw in college where the girls inserted the push on lights that you can buy at the hardware store. That way their tummies lit up like the care bears!

Make Your Own Animal Nose, Ears, Tail for Halloween