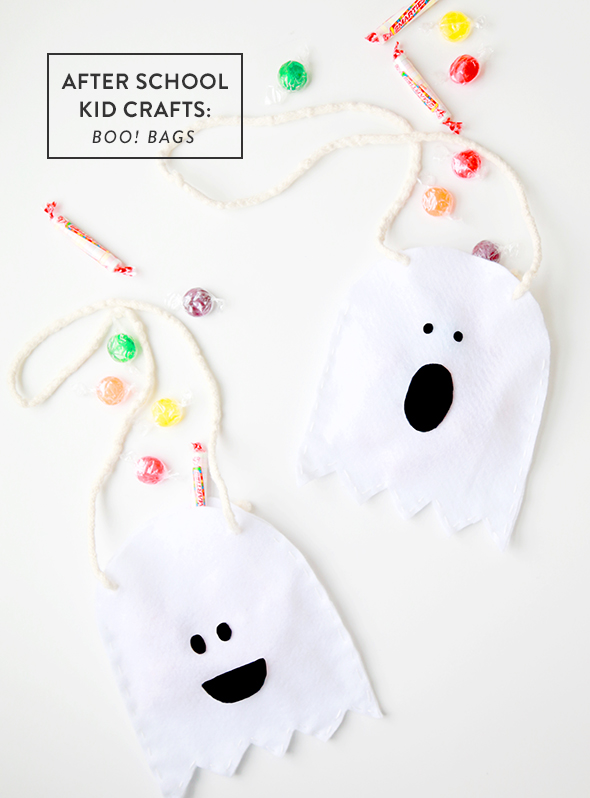 Today’s after school kid craft project is a easy sewing project making BOO satchel bags to hold tricks and treats on Halloween. Henry’s been asking about doing another sewing project for a while, he loves them (or maybe just all the one on one time with mom?) so I thought this would be the perfect little project for him and his friend Viv to do last week after school.

We made these bags in collaboration with the TOCA BOO app for Halloween. I was excited when they reached out because we are huge fans of Toca Boca apps. They are some of Henry’s and my very favorites and in my opinion are leaps above most other kid play apps in terms of design and imaginative, gender neutral play. 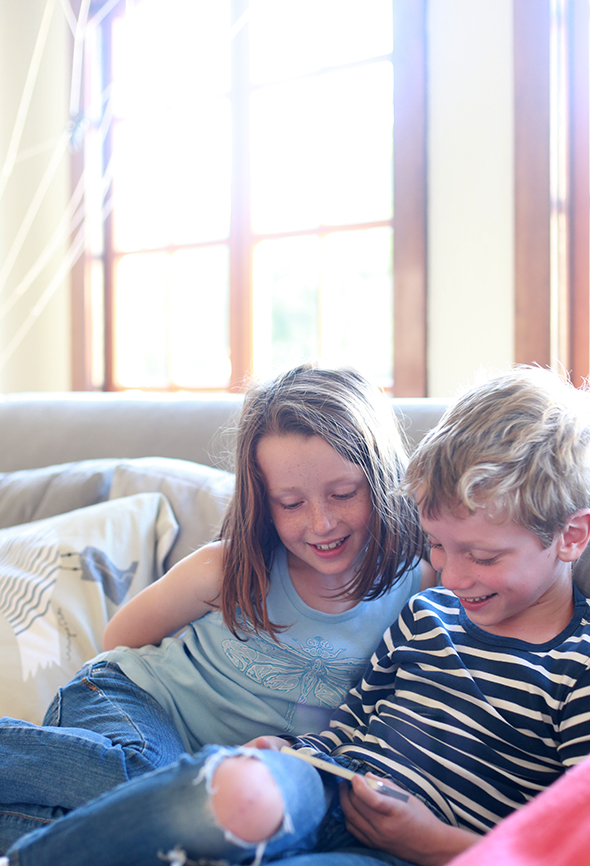 This new app, TOCA BOO was just released in time for Halloween and Henry’s been spending all of this allocated screen time on it this last week. It’s so sweet! You play Bonnie, a little girl ghost who runs around a big dark house to hide and then jump out and scare her family. It’s really easy to play! 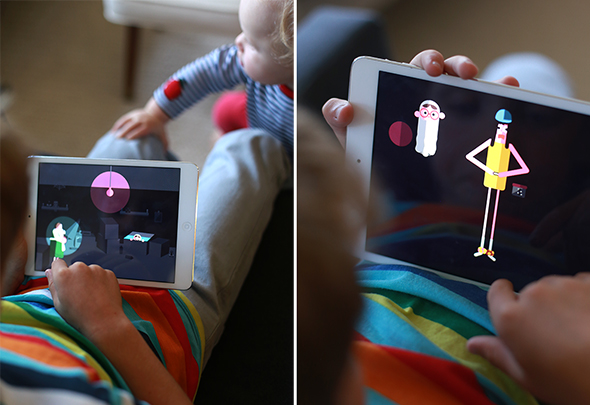 Toca Boca apps are some of Henry’s very favorites, like the Toca Store and Toca Hair Salon-Christmas (Henry plays this one year round even though it’s a Christmas app!).  He loves them because they’re imaginative, funny, and easy to play. I love them because they’re gender neutral, absolutely gorgeously designed with no ads or in-app purchases popping up. They really are our favorite apps (and I’m not being paid to say that!) and TOCA BOO did not disappoint.  In just a few sessions he figured out all kinds of funny hidden surprises in the game. Kids are so tech savvy! I have a feeling this will be another seasonal app that he ends up playing year round. Also, check out this cute kids ‘horror’ movie and Boo party printables Toca Boca released with the app last week. 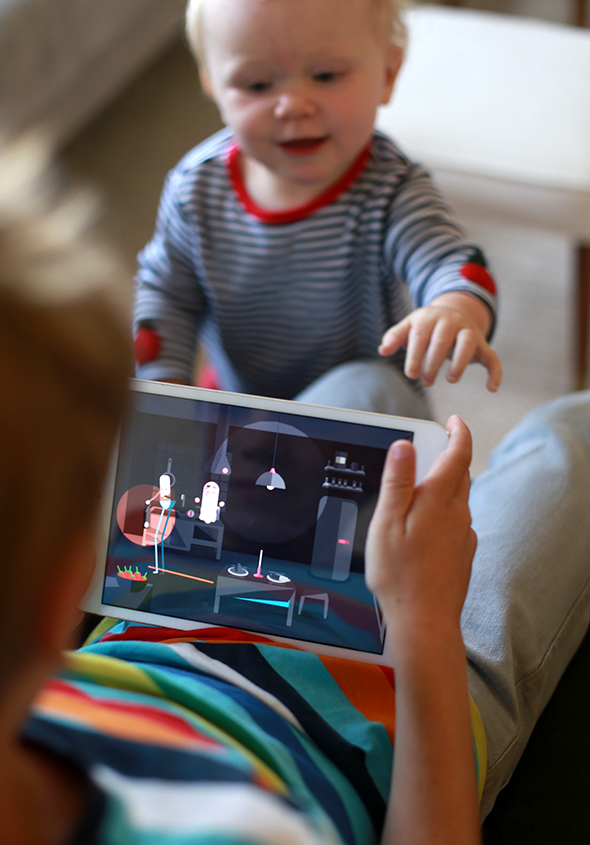 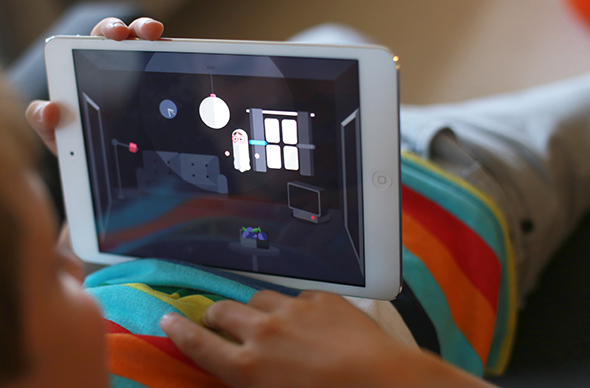 I let Henry and his friend Viv play TOCA BOO while I set up supplies for the BOO bags project.

Here’s how to make them: 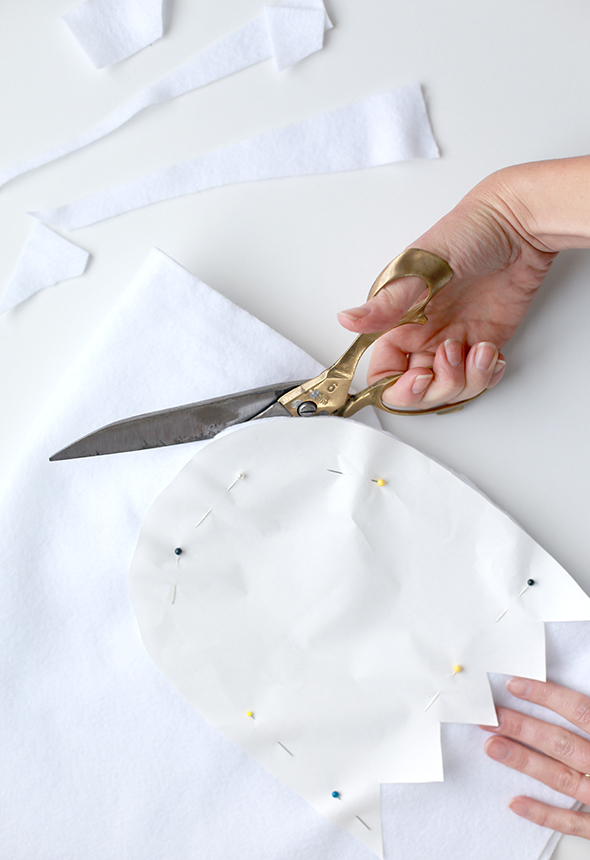 Step 1: Cut out a ghost shape on paper and pin to white felt folded over to make two identical pieces 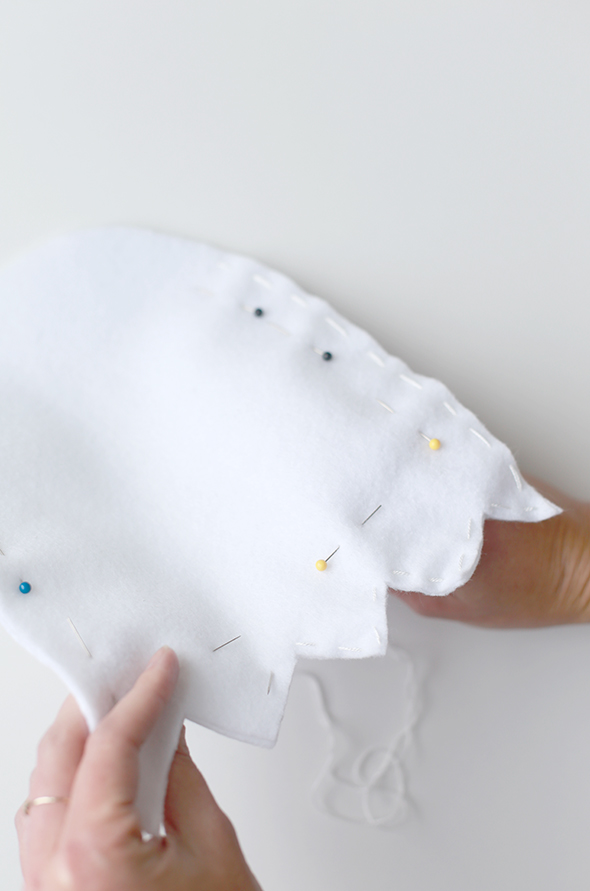 Step 2: Pin pieces together and show children how to sew with an embroidery needle and thread (great for elementary school aged kids). 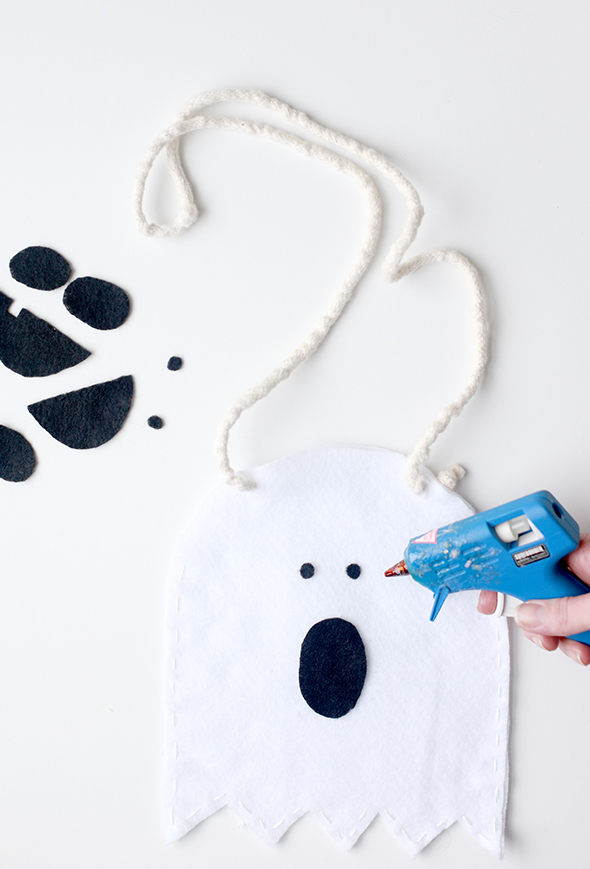 Step 3: Cut face pieces out of black felt for them to choose what expression they want their ghost to make and ask them to place them on the bag. Have an adult glue them in place with a hot glue gun. 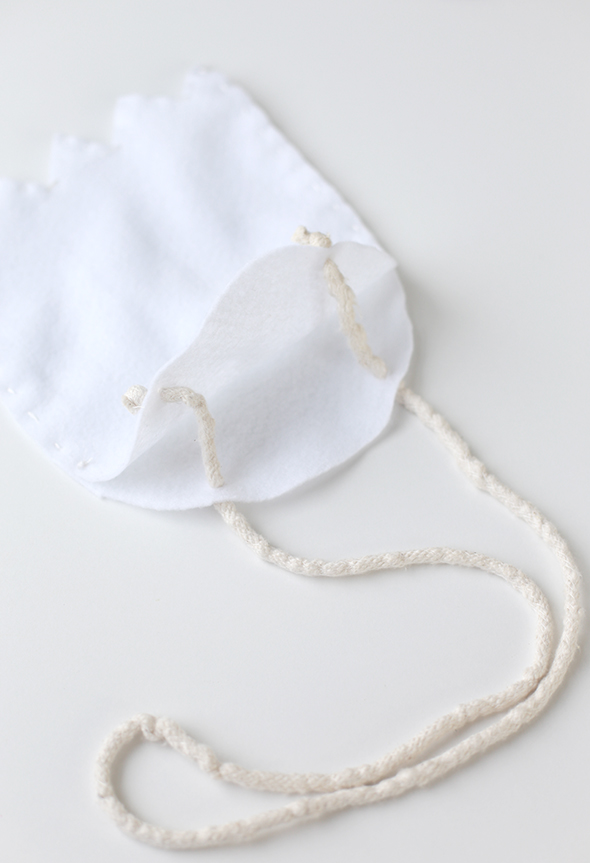 Step 4: 2. Cut a slit on both sides and pull natural rope through, knotting on the other side 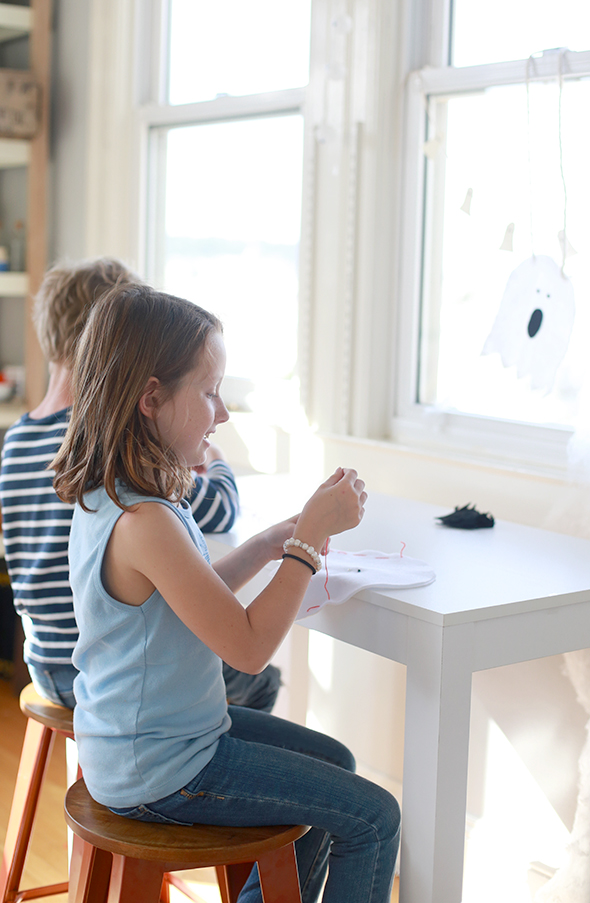 Henry and Viv had so much fun with this! I had to give them each some sewing attention at first, but then they got the hang of it pretty quick. They especially loved picking out face features for their ghosts. Can you guess which one is Henry’s? 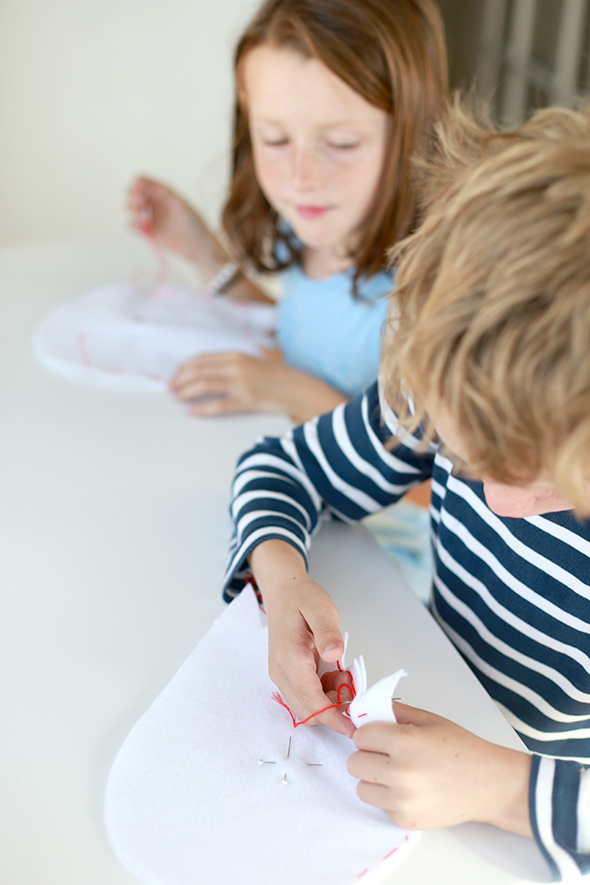 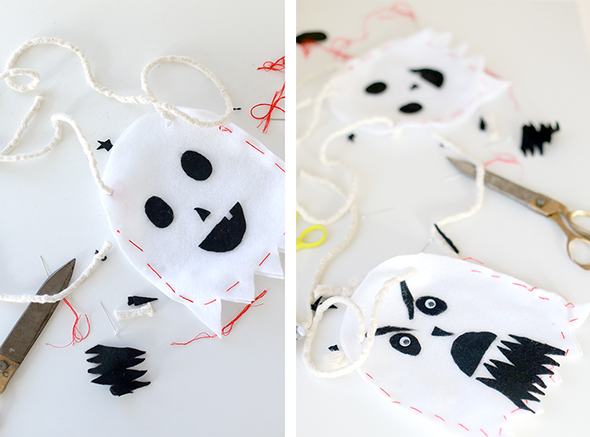 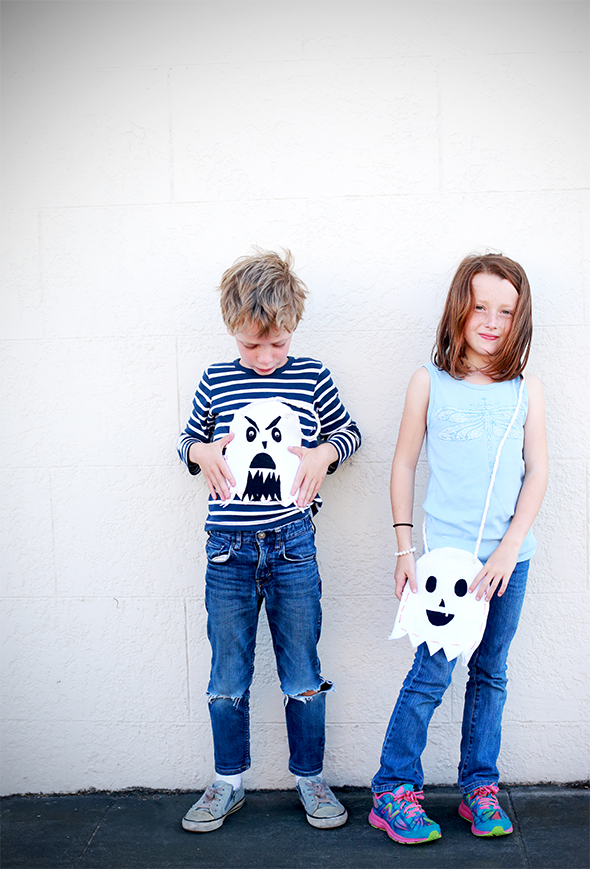 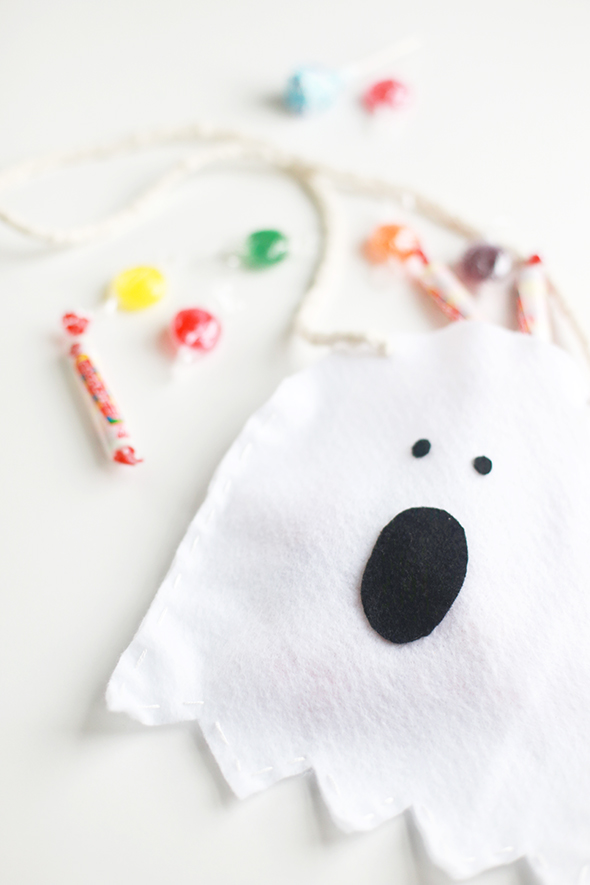 That’s it! Carry your BOO bags around this Friday to collect treats or show the neighbors your favorite silly tricks.

Thank you to Toca Boca for sponsoring this post. Download the brand new TOCA BOO app right here on iTunes for $2.99.

Oh what an adorable app. This company sounds amazing!

How cute are these bags! Lovely looking game too

how sweet, looks like a really cool company i’m embarrassed i’ve never heard of it :0

So cute!! Checking out this app now. I’m sick of angry birds

So fun! I might have to play around with this myself…

We love Toca Boca too- fans of Toca Town actually which is kind of new too I think. Cute Boo bags, btw!

How have I not heard of Toca Town? Looking into it right now 🙂

Make Your Own Animal Nose, Ears, Tail for Halloween