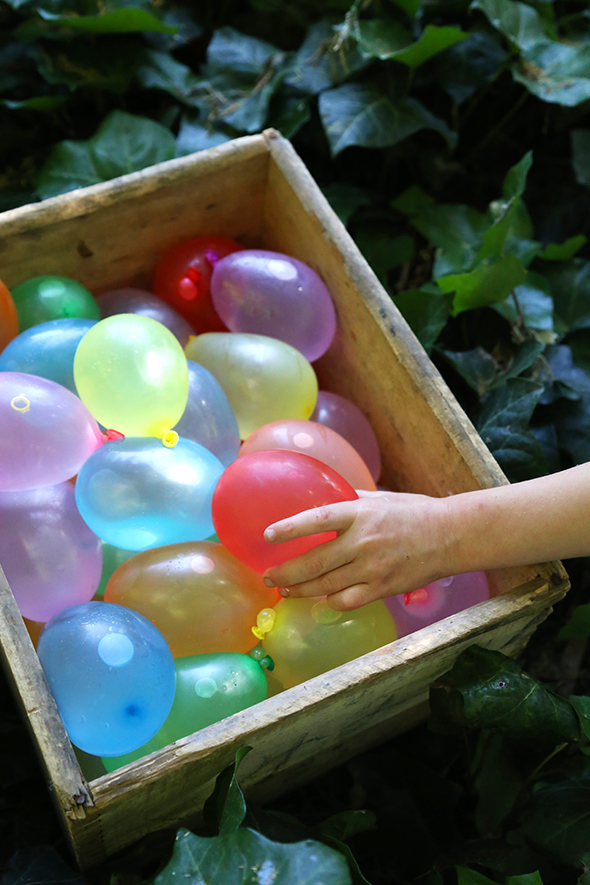 As I mentioned a couple weeks ago, we had a big welcome to summer party with Henry’s cousins a few weeks ago to celebrate the end of the school year. It was so much fun, and a tradition I’d love to continue every year. Nothing is better than fun, active games in the sun with cousins. That’s what every summer should be filled to the brim with, don’t you think? Gabby, Jordan and I each planned different backyard activities to host for the kids. Last week I shared the fruit kabob sundaes, and today I’m sharing our giant water balloon slingshot and toss! 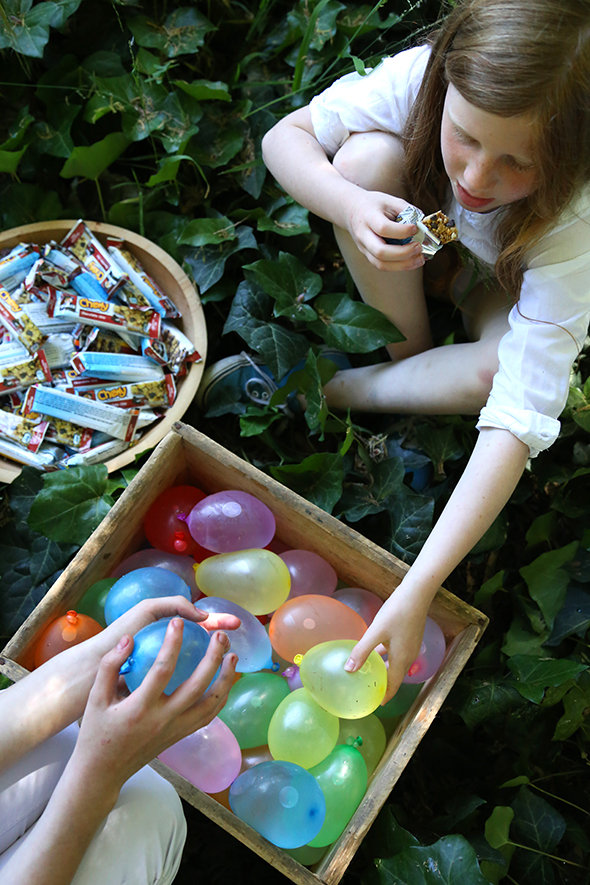 Keep reading to hear all about it!

Thanks to Quaker Chewy for sponsoring our Welcome to Summer Party and fueling backyard fun! Quaker Chewy gives kids the energy they need to play. That’s why Quaker and NERF are teaming up to fuel backyard fun, helping families get active together, right in their own backyard. 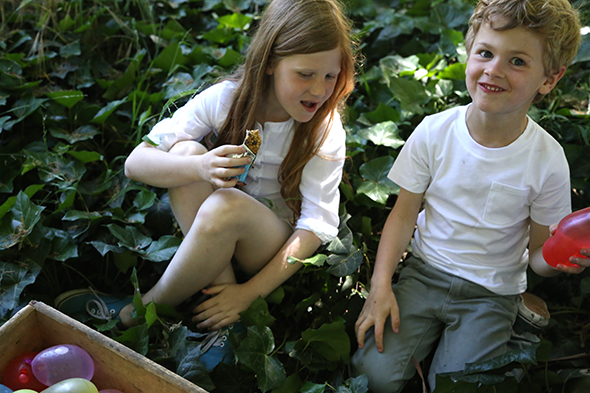 When I told Henry we’d have water balloons at the party, he was over the moon! What is more irresistible to kids than a big crate of colorful water balloons? We had them set out while doing other activities and they slowly started disappearing despite my careful watch. In the image above Moses is begging me to let him take just ONE more before we started. I’m guessing if we had a super scientific experiment and put a bunch of kids in front of a plate of delicious freshly baked chocolate chip cookies and a crate of water balloons, the water balloons would go first. 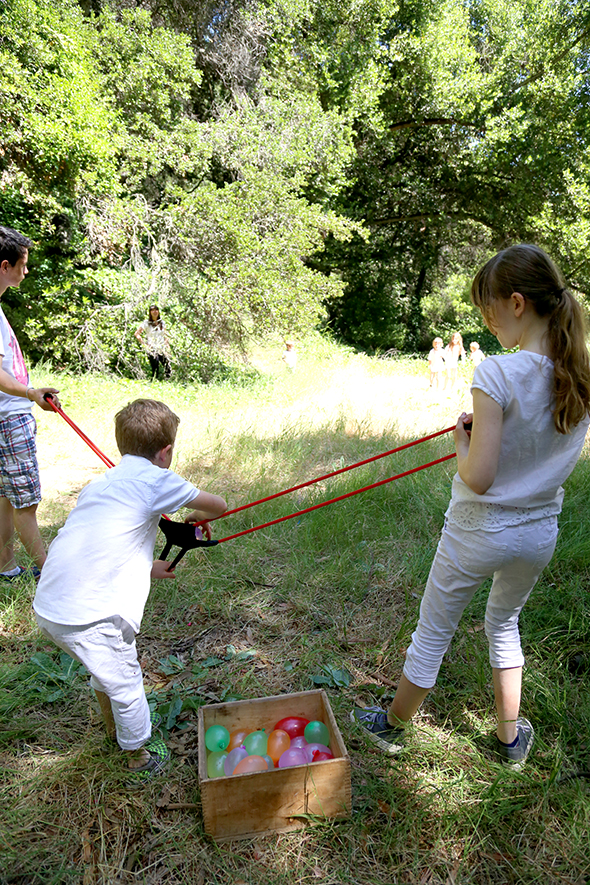 We ordered one of those huge water balloon slingshots online and when it came in the mail, Henry insisted on testing it out next door at the park with some neighbors. There was a bit of confusion until I realized he actually wanted me to slingshot the water balloon at him. Hey, ooookay! You want me to just throw water balloons at you? Now we’re talking. Initially I thought we’d have to convince the dads to be targets, but it turns out he wasn’t the only cousin who really wanted to be on the receiving end of the slingshot! 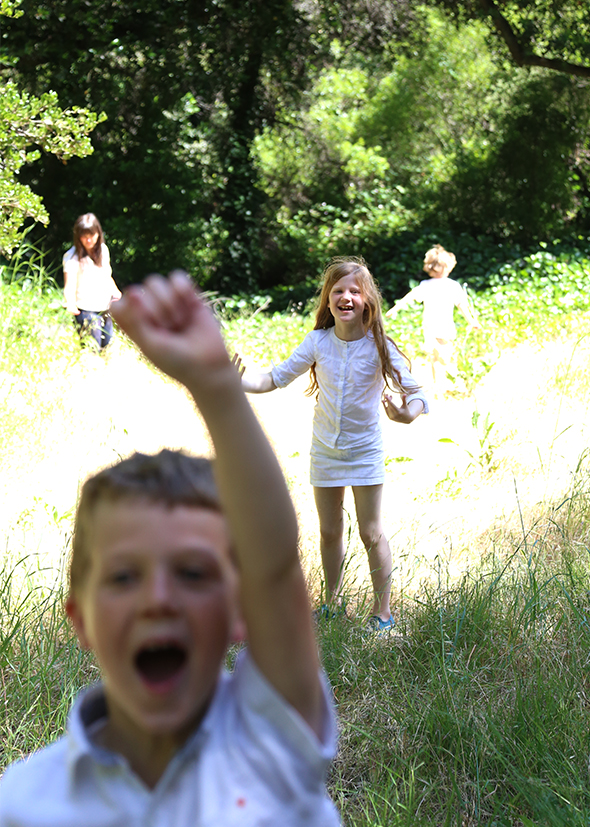 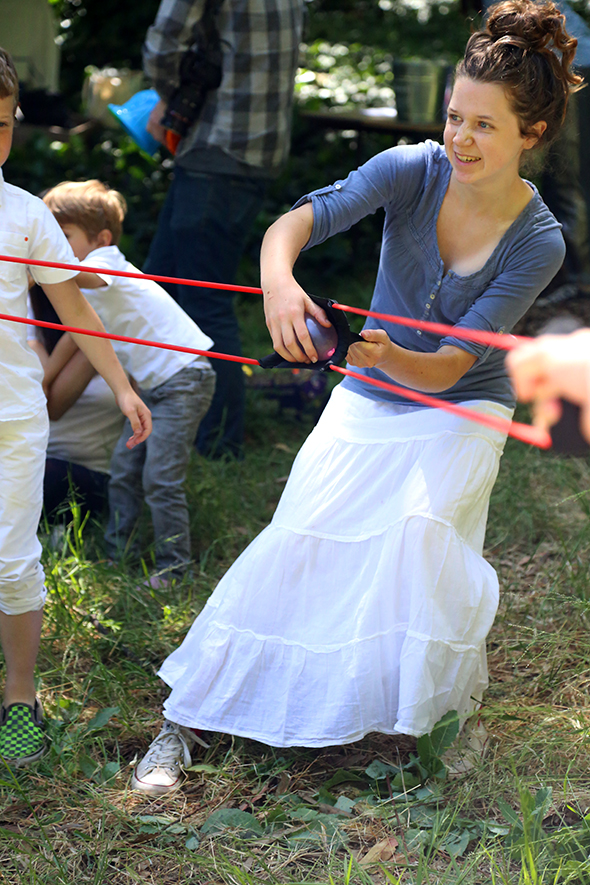 It’s a great family activity because everyone has a job. You need two pretty strong kids to hold the sides (probably 12 years+), and then the sling shotter in the middle could be any age really. Then of course the targets! We had a few different cousins who were interested in being shot at and others to hand balloons and refill. 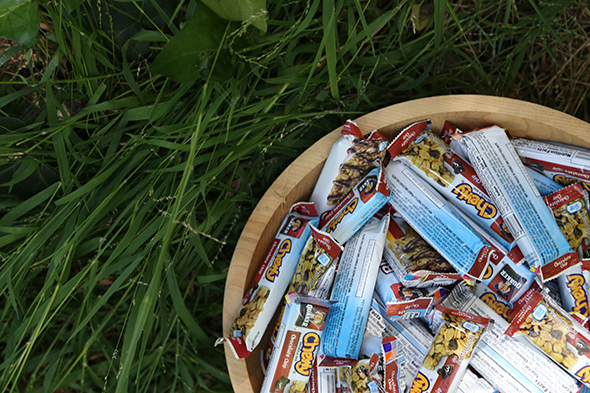 We took a little break after the slingshot for a Quaker Chewy granola bar snack. Big chocolate drizzled versions for the big kids, regular sized for the littles. 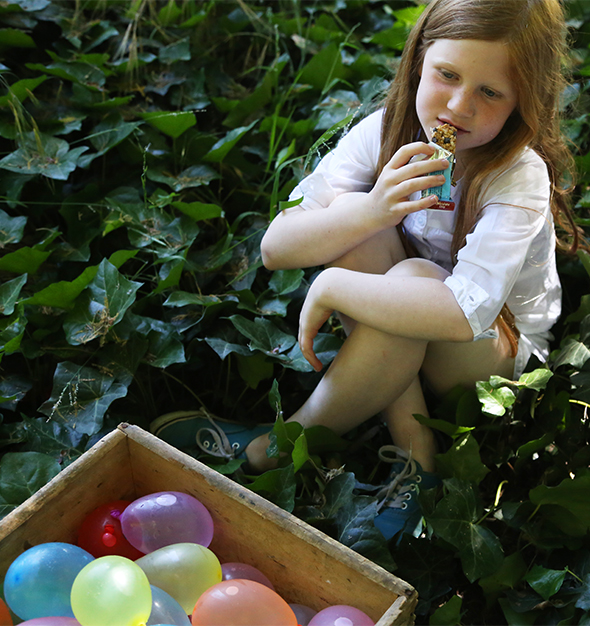 Next up we had a water balloon toss. Everyone picked a partner (again, any age) and grabbed a water balloon between them. They lined up in rows and each time they successfully caught the water balloon they could each take a step back so it became more difficult the better you are.  If the water balloon dropped (and got someone wet- which was the best part), you could then run quick and grab another one to start over. So even if you weren’t catching well, it was still fun. 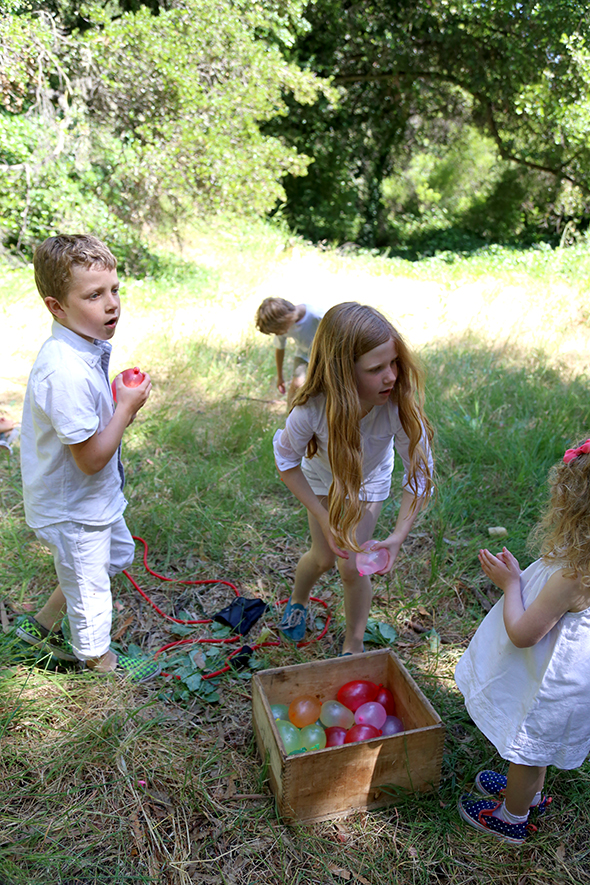 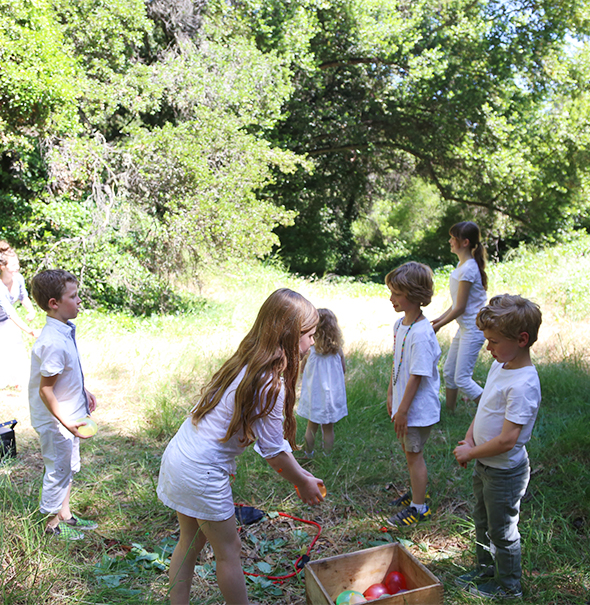 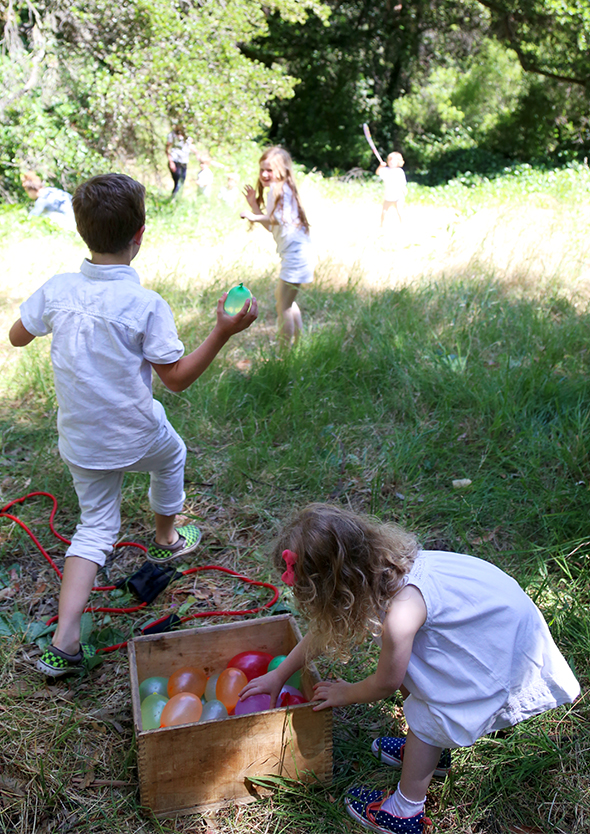 At the end Henry, Oscar and Betty weren’t feeling like they got wet enough and requested some direct hits. This of course we a welcome request for the other cousins! 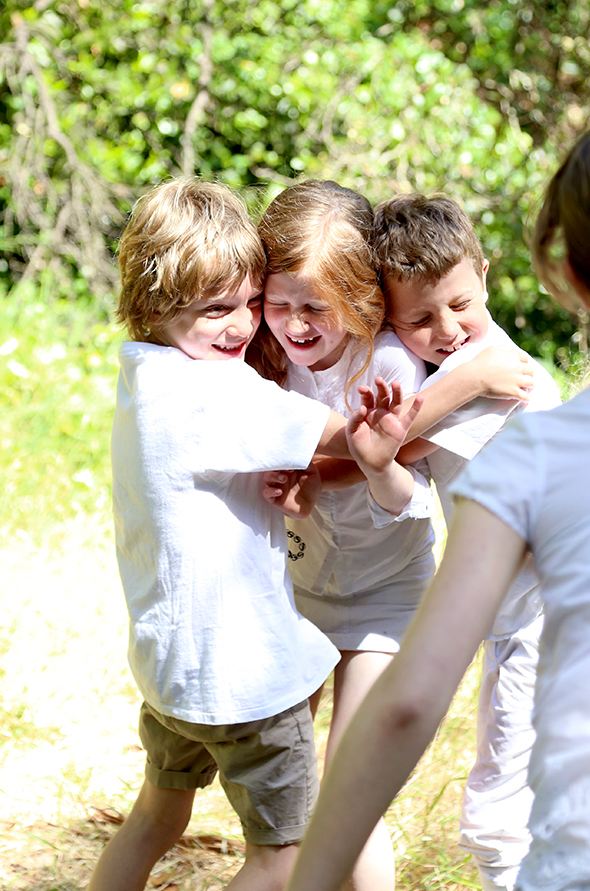 Such a fun activity. Nothing is more fun in the summer than water balloons!

I am curious to find out what blog system you’re working with?

I’m experiencing some small security problems with my latest
site and I would like to find something more secure.
Do you have any recommendations?

This looks like a ton of fun. I just worry about the little squirrels and birds who might eat all those little water balloon pieces. There was not a water balloon fight I had as a kid that my mom didn’t make us go pick up the pieces after. Ya I know, “c’mon mom!” But it taught me to be responsible when in nature. To that note, I hope you continue the fun but keep in mind all the furr babies.

Oh how wonderful, such colorful balloons. the best!

the water balloons look like great fun , and thanks for letting me tag along and play my own summer game , see how quick i can work out what sponser this post is for ?? its becoming a game i can play on here daily ..thanks

very able put up, i in ability applause this web site, haversack on it

What a fun way to bring in the summer! I loved how the whole family was able to have fun together!

I love this cousin party, such a cute idea

May I ask why everyone is wearing white?

Oh just because it felt summery and it was better for the color war Jordan put on!