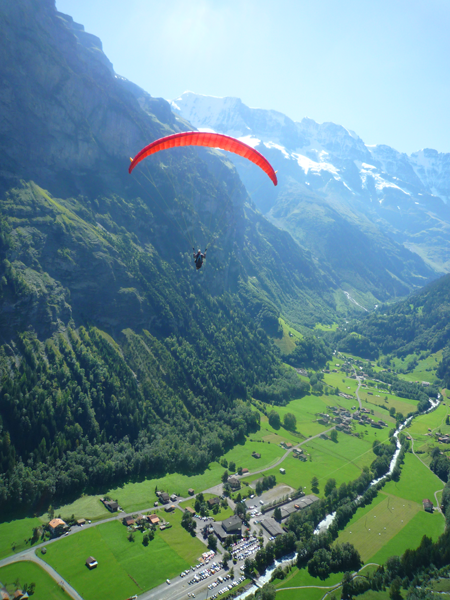 So Jared is an experienced paraglider. He got into it in college and has loved it ever since. It seems a little crazy but it’s actually pretty safe and he’s a very safe pilot.  I had only done one tandem on a teeny bitty hill and really wanted to try another. Interlaken is a paragliding mecca so it seemed like the perfect opportunity to try it again. 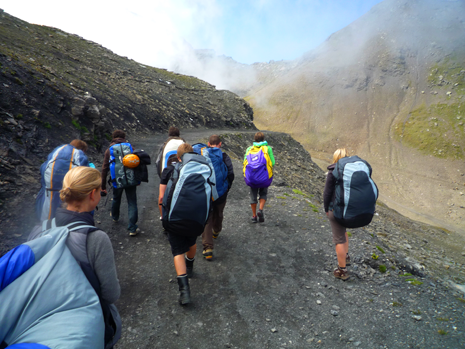 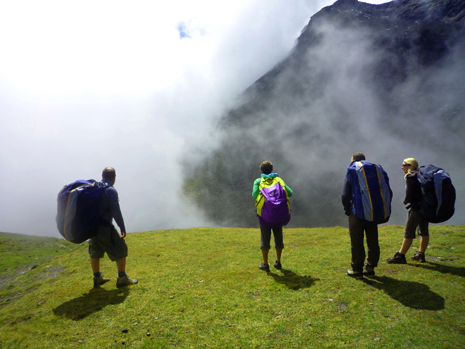 We were going to try to launch off of this peak but as you can see, the cloud level was higher than we thought. 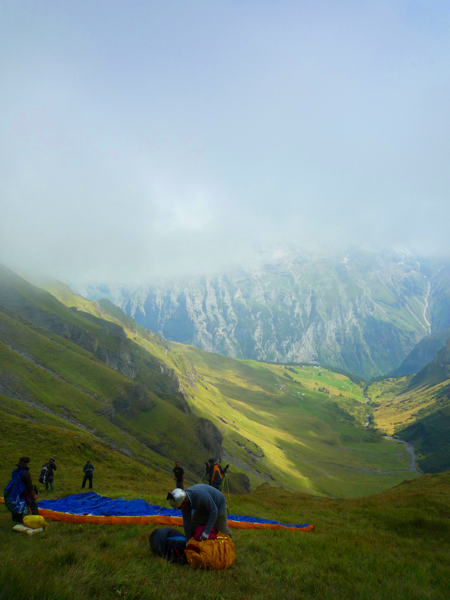 We hiked down further and found another spot to launch beneath the clouds. 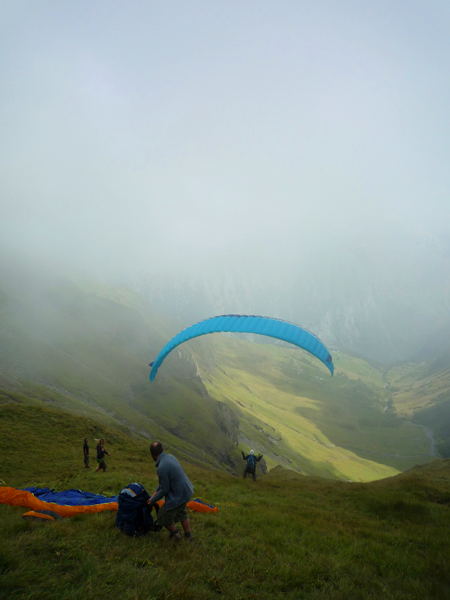 Once that wing was set up on the ground the instructor and I started running down that hill and pretty soon our feet were off the ground (craaaazy!). We caught some thermals and got higher over that valley and then headed over that 3,000 foot cliff ahead (that was one point I had to close my eyes for a second) 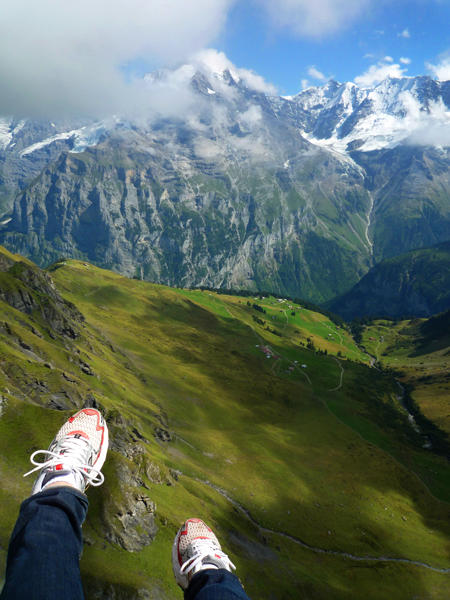 I was just kind of along for the ride. My only responsibilities were taking pretty photos of my running shoes with the Alps in the background and not barfing (as per my instructor’s request).
Jared took a video of this flight from his helmet cam and you can watch it right here (it’s long but if you click ‘see more’ there is a list of shots you can skip ahead to like the instructor and I doing spins and tricks! Ahh!) 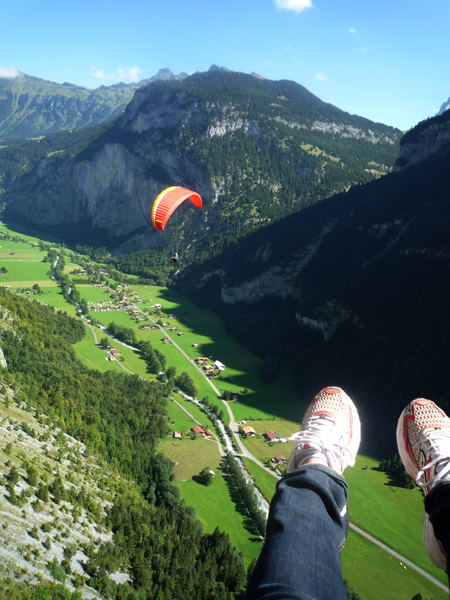 It was seriously incredible, although terrifying as the same time! We were about 3,000 feet above this valley in the photo above. I realized just about this time that my stomach had been clenched with terror since we had launched I tried to manually unclench it with no success. My instructor started into some crazy aerial twists and turns which was seriously the funnest/scariest thing I’ve ever done.
(Jared is in the red wing in these photos) 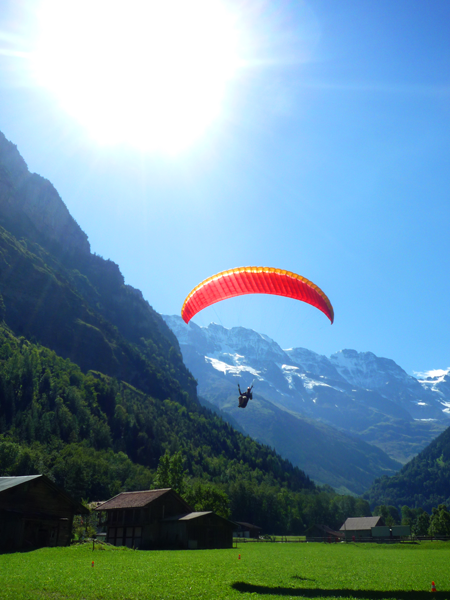 We had a nice landing right here in this gorgeous valley. I didn’t have much to compare it to but Jared said it was the best flight of his life. For me it was for sure one of the most incredible things I’ve ever experienced. The valley was also a really popular spot for base jumping. You’d look up and see people just flying off a 3,000 foot cliff in their wing suits. INSANE!

Have you ever done something crazy like that? I think I was more terrified watching the video later than during the actual flight (it was surreal) but geez what an amazing way to experience the Alps!

What company did you go with? My husband and I are planning a trip to Europe and this would be perfect!

Oh! My only paragliding experience was in Interlaken, and I've been dying to go back and try it again! I'm going to have to show my husband these photos = maybe he'll go with me next summer!

Oh wow! Amazing. Tiho is the more adventurous of the two of us (he's been sky diving), but I think I'd like to try hang gliding one day. Soaring like a bird would feel incredible.

i went paragliding in interlocken too! it was so amazing and probably the craziest thing i've ever done (i'm a wimp). i actually lost most of my pictures from that trip so this was so fun to see, and brought back that exhilarating memory! i would love to do it again!

Was this in Interlaken? Looks just like the valley where I did this in college. Also went bungee jumping! Pretty sure I'm too old for all that now!

That looks so amazing! I am to scared to go with my husband but am warming up to the idea after 12 years of being with him. I keep telling myself it is pretty safe. A lot of people get it confused with base jumping and it is nothing like it.

amazing pics! So glad you got to do that!

As soon as I saw this I thought "THAT MUST BE LAUTERBRUNNEN". That is the most magical place I've ever been. The tinkling bells on the cows, the alps, the stacks of wood, oh it is magical. I have LOVED revisiting it in your pictures, which are incredible.

I'm not sure if I'm brave enough, but I would love to try this, amazing photographs!

That is A.W.E.S.O.M.E!! I jumped out of an airplane once – with an instructor {funny thing: my instructor also asked me not to barf during the flight}. It was very fun. I'd love to try paragliding – especially in Switzerland!! This looks amazing.

OH MY GOSH YOU ARE CRAZY DARING. Not sure if I'd ever, ever have the courage to do this….Your pics are amazing! 🙂

Ann Marie, where does your husband work? That sounds like my husband's dream to paraglide to and from work!

Simply Blythe + Christa, It made it easy that we started just running down I hill. There's no way I could just jump off a cliff or sky dive out of an airplane. You're braver than I!

That looks incredible! I would do this in a heartbeat, no problem! I would def have to go tandem too, but I know any idea of being scared would be far from my mind. This is going on the bucket list 🙂

my dad used to do that, but he'd jump off the mountains near our house (we lived in lake arrowhead california…like the water bottle "arrowhead"). so awesome and i would LOVE to try it (not so likely any time soon since i have a 6 month old crawling around ;)Smoking Crayolas Blogspot

I think I would try it, but still it strikes me as terrifying. I have a heights thing, but I like to challenge it ever now and then.

love this! i just sent the link over to my husband. he works in the outdoor industry and many of his coworkers paraglide to and from work every day. my husband gets to go to switzerland on a business trip late november…he totally has to do this (am currently trying to hop into his luggage!). love the photos!

you are so hard core.i've jumped from an airplane, once, and that was that.fun for sure, but nothing i'd need to do again.

wow! beautiful pictures. but seeing the one with your feet at the bottom made my stomach flip a bit. HOW did you do this????? you are totally brave. 🙂 x

wow, that sounds amazing! But scary!

You are very brave to do it I must say. Wehn I was in Norway this Summer I saw some paragliders and I thought it was so scary.

This is something I have ALWAYS wanted to do…I had opportunity when traveling Europe when I was in my early 20's, but NO FUNDING :)I have parachuted tandem…that was wild. Hard to believe I did that…(I went tandem because there was only 10 min training, and you jump from WAY higher, much longer free fall)I haven't done anything for an adrenalin rush since I turned 30…unless you count watching my son almost spill a glass of milk or something 🙂

10 Favorites from Madewell for the Holidays

7 Apps that make our lives easier