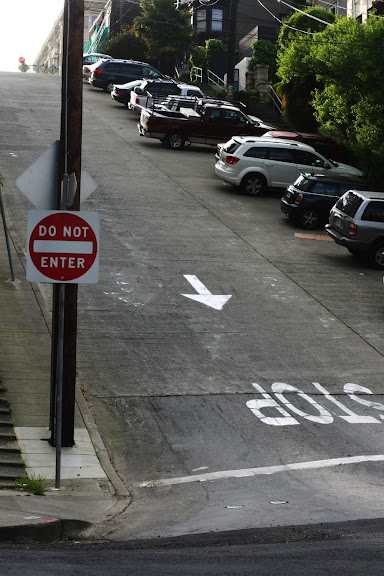 San Francisco is known, amongst other more respectable things, for its steep streets. This photo is of Filbert street, the steepest street in San Francisco; and at 31.5% grade, it’s the 4th steepest street in the world (tied at 4th with another San Francisco street, 22nd street). I was in the neighborhood picking up something from craigslist and stumbled upon this famously steep street (well, okay…full disclosure here: I kind of have an obsession with steep streets and ventured slightly out of my way, camera in hand, to find it).

Streets that are steeper:
Eldred Street in LA at 32%
Baldwin Street in New Zealand at 35% (they think they are the steepest, but were measured incorrectly).
Canton Ave in Pennsylvania at 37%

There is actually a section of a street here in San Francisco that has a 38% grade, but to qualify according to the Guinness Book, it has to maintain the grade for a whole block.

Baldwin Street has all sorts of yearly competitions and events on its street to showcase its famous steepness. I think Jay Leno once rolled watermelons down this one, but I think we can come up with something better. Any ideas? Rolls of ribbon?

Caroline reminded me of this commercial. It’s so beautiful! Also check out the behind the scenes about the making of the video here

The street in Laguna is fun because you can drive both up and down it! Going up you feel like you might tumble backwards. The SF street is also great fun! I always surprise guests and go down it when they visit (it’s also right by Lombard). I must have a thing for steep streets…..who knew.

I liked this post, you learn something new everyday!

yes, Paula I totally thought of a street in Laguna Beach when I read this! It totally freaked me out to drive on it.

Our old van was an extra in that commercial! A friend was on the crew of the shoot, and my husband got to stick around all day, chase/collect balls, and hang out with the parrots of telegraph hill (for reals). We ended up with a bag of those bouncy balls and $1000. Not bad!

now i MUST find this eldred street you speak of. there's a super steep one in laguna beach, too. i'll have to find out what the grade of that one is. 'cause it's scaaaary!

that's up the block from me! every time we go down a steep hill, i get my son to say "whee" as we drive down it with our hands up in the air, that way it's a lot more fun that way! 🙂

Steep streets fascinate (and scare) me. Love this post, and that commercial is incredible.

oh my goodness! that video is so beautiful! thank you for this.

billie, you probably have walked up one of the steepest. Here's the list:The Steepest Streets in the City, Purportedly1. (tie) Filbert between Leavenworth and Hyde (31.5% grade)1. (tie) 22nd between Church and Vicksburg (31.5% grade)3. Jones between Union and Filbert (29% grade)4. Duboce between Buena Vista and Alpine (27.9% grade)5. Jones between Green and Union (26% grade)6. Webster between Vallejo and Broadway (26% grade)7. Duboce between Alpine and Divisadero (25% grade)8. Jones between Pine and California (24.8 grade)9. Fillmore between Vallejo and Broadway (24% grade)

I could have sworn the steepest streets were the ones over here in Nob HIll. Guess it just feels that way going up and down with a stroller 🙂 Now I am going to have to go over to Filbert and compare!

oooh i'm obsessed with the super steep streets in SF too!

That video is so much fun! I would be too afraid to ever drive down that street though.

amazing! i think i'd be obsessed with them too if i lived there! san francisco is so amazing

Jeanette, yes i've driven down it and it's pretty terrifying

care, yes i love that commercial! totally forgot about that!

rad commercial care. love it. i'm going to have to venture out to that street in la – it's over by pasadena.

Ohhh, I'm loving the bouncy ball idea but that street freaks me out. I wouldn't even want to walk down it, let alone drive, OR park heavens no!

In college, during the huge campus-wide party at the end of the year, a group of students would toss cases upon cases of bouncy balls down Woodstock in Portland at some ungodly hour of the night. So much fun. And probably so obnoxious for the people that had to pick them out of their flower beds the next morning.

7 Apps that make our lives easier

A Simple Game to Get Kids Talking