I’ve been so happy to learn that these old favorite films like The Sound of Music really do span time and generations. My kids LOVE it. I grew up watching a lot of musicals with my family, a whole lot! There is something so timeless and beautiful about these films. A few years ago I took Henry to a The Sound of Music singalong at The Castro Theatre when we lived in SF which was SO FUN. Recently, we watched it again this time with the girls and they have been listening to the soundtrack and asking to watch it again ever since.

I have distinct memories spending hours with my sister in the mid 80s recreating The Sound of Music with my barbies. Elaborate story lines involving overturned beds transformed into boats while attempting an escape from the Nazis from a disco school dance! A bit of a departure from the original story line but so many fond memories inspired by the film.

Do you have some of those same memories of The Sound of Music? 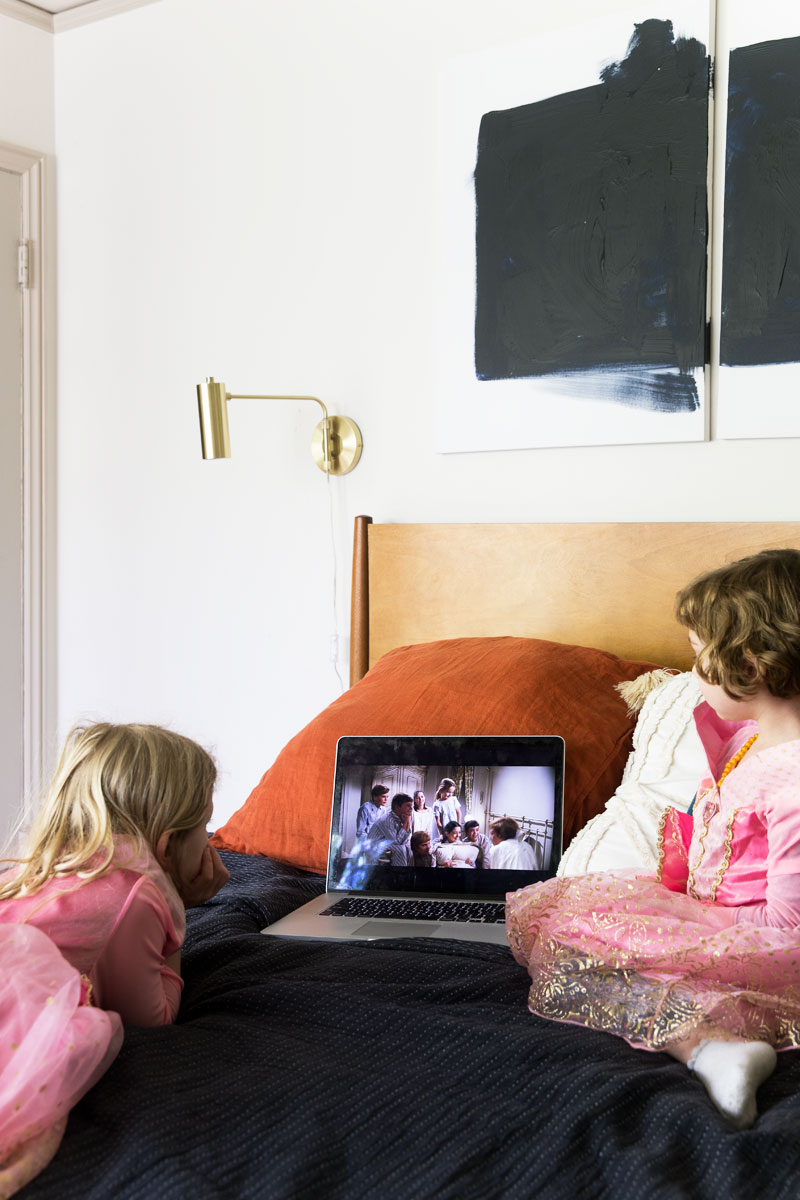 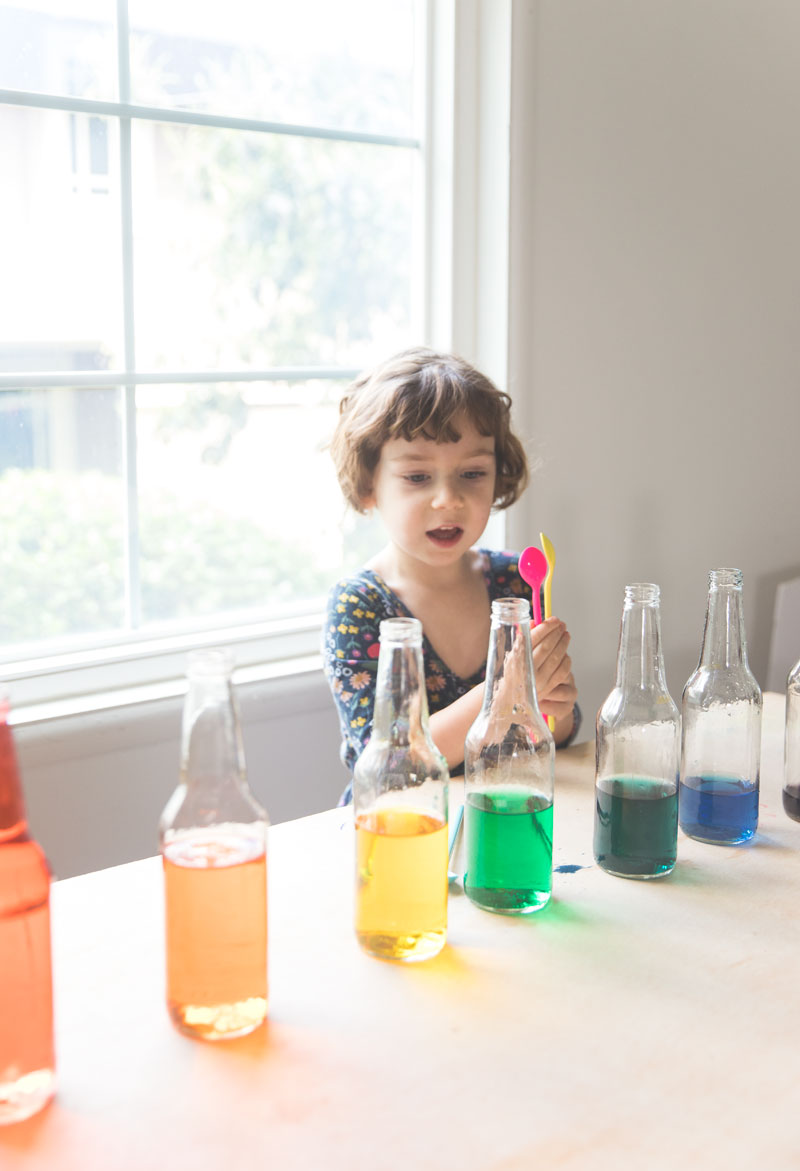 These days, my kids have quiet time (aka screen time) every day. I try to make connections between what they’re watching and activities we do together for our quarantine home school. Last week after watching The Sound of Music we made these fun “Do-Re-Mi” musical glasses together. It’s really easy and fun to do! It’s a great lesson in music, science of sound, and also a bit of color theory too!

Here’s how to make them:

1. Collect 7 glasses from recycling and wash them clean

2. Fill each with approximately these amounts of water in cups (you can measure it out and they can pour) 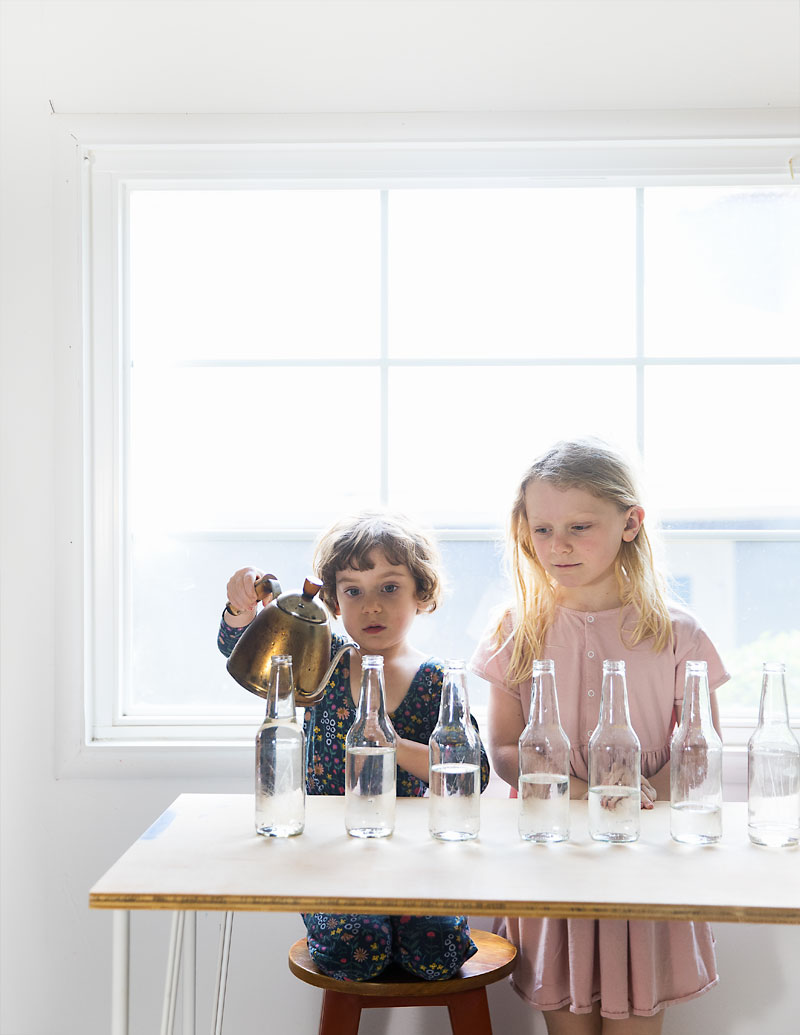 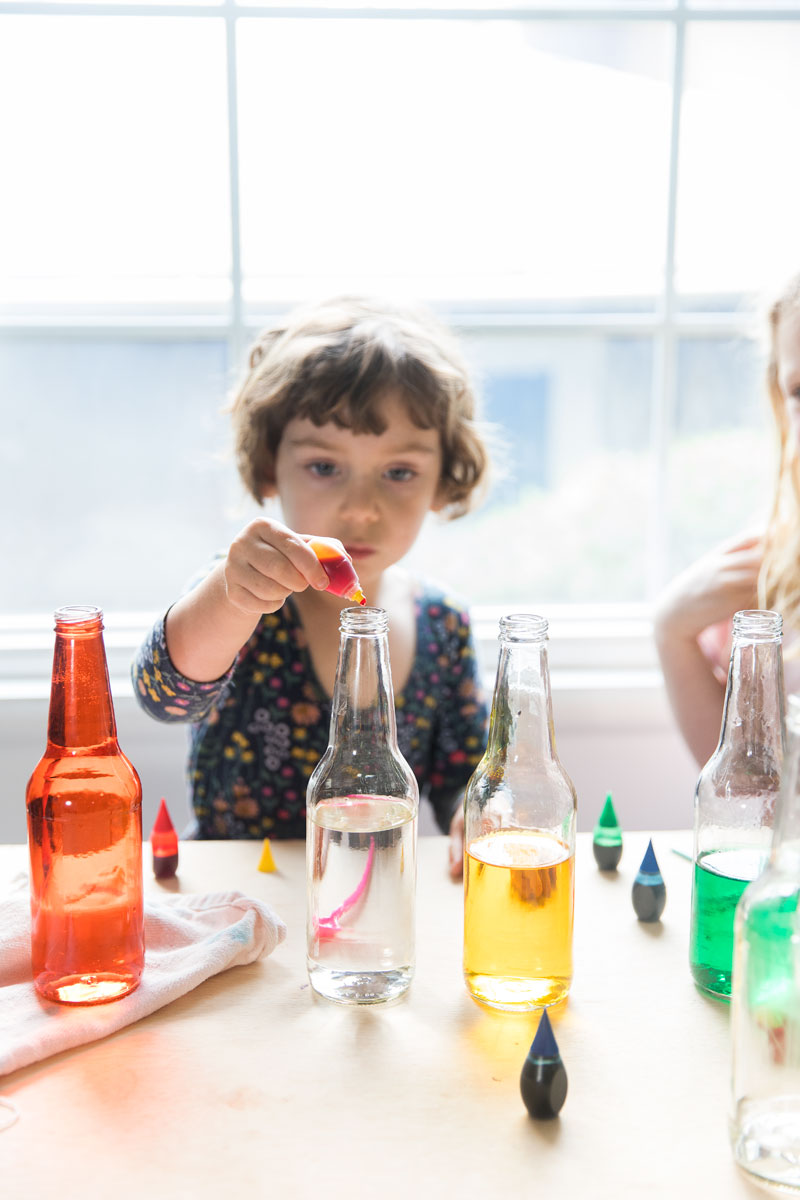 3. Test out the sound by ‘dinging’ the bottles with a utensil. Adjust as needed.

4. Add colors to each so you can identify each. Just a drop or so is good otherwise it’ll be too dark. We made a rainbow starting with red and ending in purple.

5. Once you’ve adjusted it, created a music chart for children to read the music and learn the “Do-Re-Mi” song to play on the bottles. You could use boxes of colors the way we did here, or you can write out the colors as well. 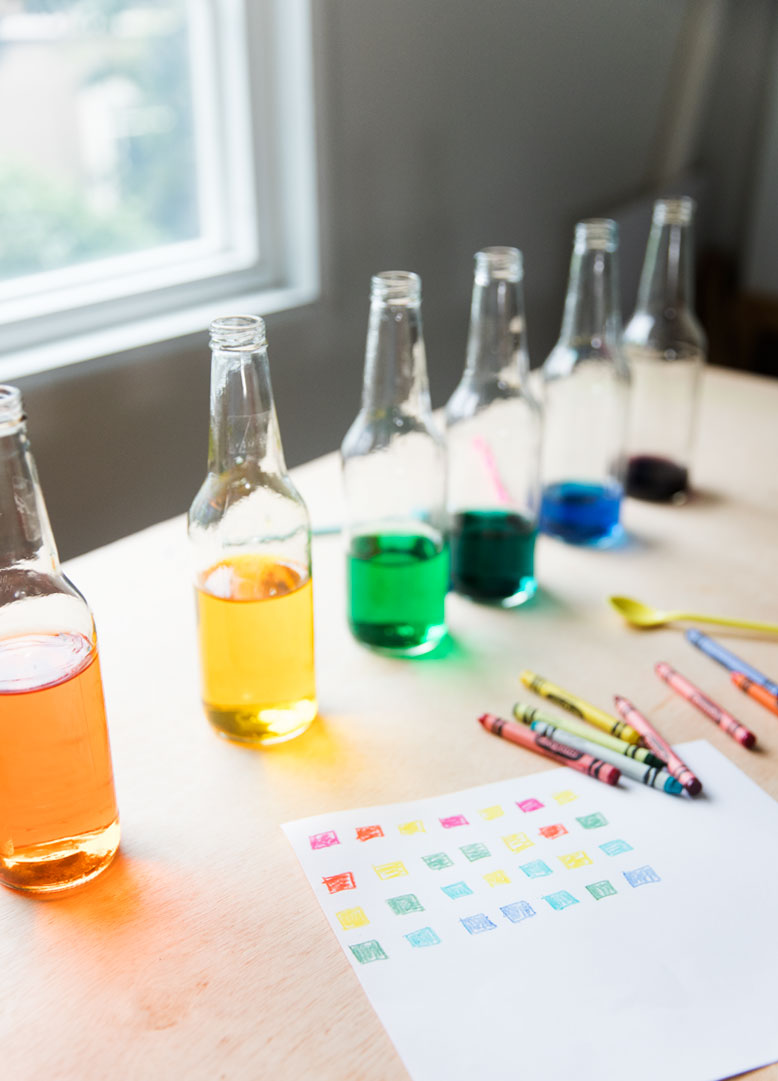 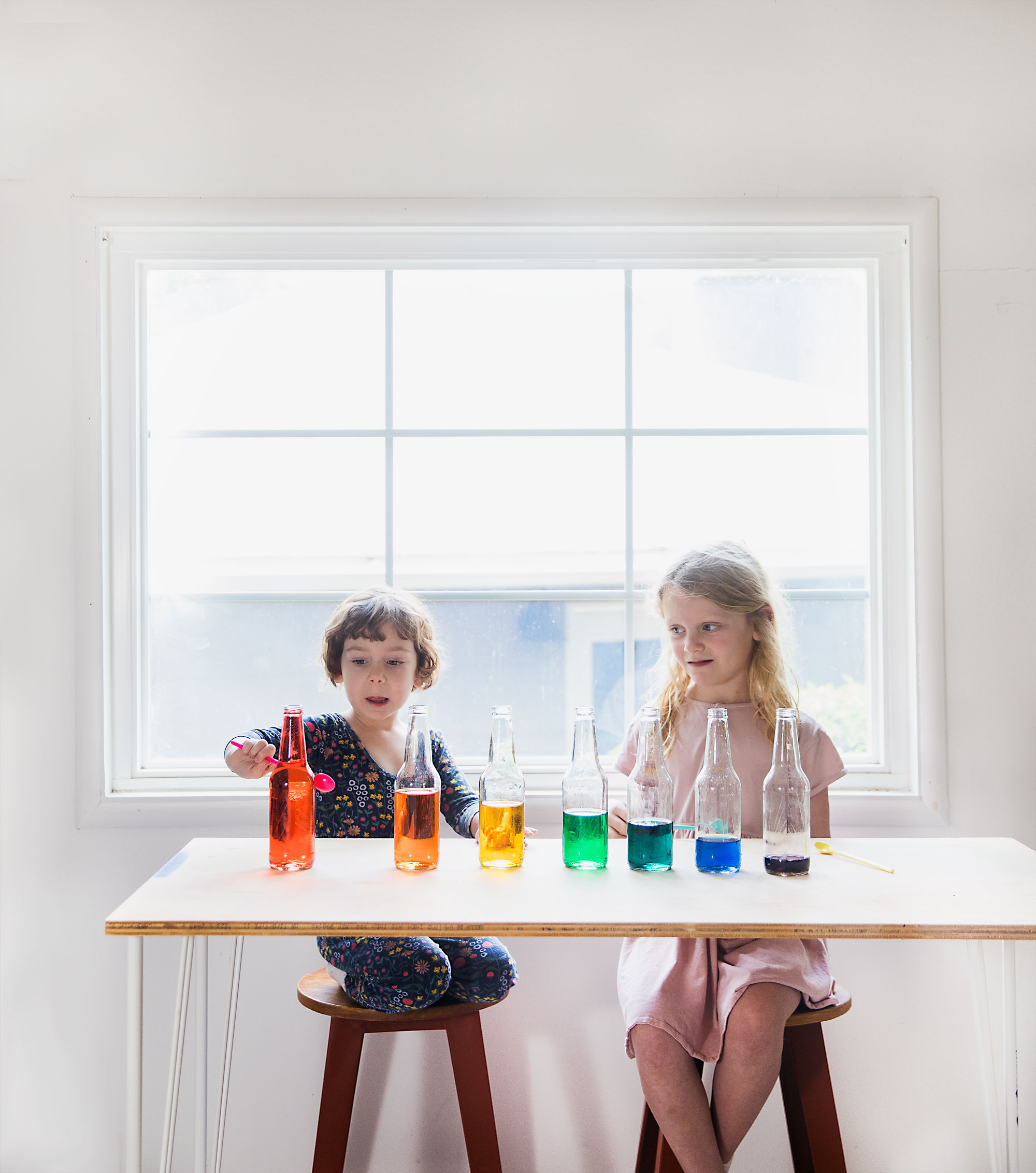 6. Invite your family in for the “Do-Re-Mi” performance (check our IG post to see how it sounds!).

Thanks to The Rodgers & Hammerstein Organization for sponsoring this post.

I really very thankful and hopeful that you will write many more posts like this one. Global B2B Marketplace

I am musician and play country music often and tend to look and incline more towards https://erkconstruction.ca/ as it helps me make my music video and career.

I am also wanted to see this movie that you are watching in your home with your family.
https://www.affordable-dissertation.co.uk/dissertation-writing-services-uk/

Thanks for sharing.I found a lot of interesting information here. A really very thankful and hopeful that you will write many more posts like this one. foreign b2b marketplace

This article inspires children to learn music. If you want to read articles related to music, then you can read this blog: http://www.thebestfashion.co/.

I also like films like Sound of Music. I work as a property dealer. If I get time, then I like to watch these types of films. I take the booking of flats on https://propertyjaipurme.wordpress.com/flat-and-plot-in-vaishali-nagar/.

In case you’re engaged with any part of advanced promoting or need to be, you’ll need to build up an away from of what’s associated with building up a fruitful substance advertising technique. Here, we’ll diagram https://premiumcontentwriting.com/ a portion of the key territories that any substance director or tactician need a strong comprehension of so as to run a fruitful computerized promoting effort.

thank you for this information, your articles are so much better than others.