Liz: At first, Edie wanted to be a fairy princess, but when she heard our neighbor was going to be a unicorn, she changed her mind.  Last month she saw a rainbow unicorn at a store and then it was decided it would be rainbow. I bought this crazy rainbow tulle table skirt on Amazon because I didn’t want to buy all the individual colors, and they were already cut in strips!  I just tied them around a piece of cardboard for the tail and mane, and then added elastic for the waist. The horn is just a repurposed party hat with felt and some wire. Also, I realized I forgot to add her wings! They might be my favorite part. 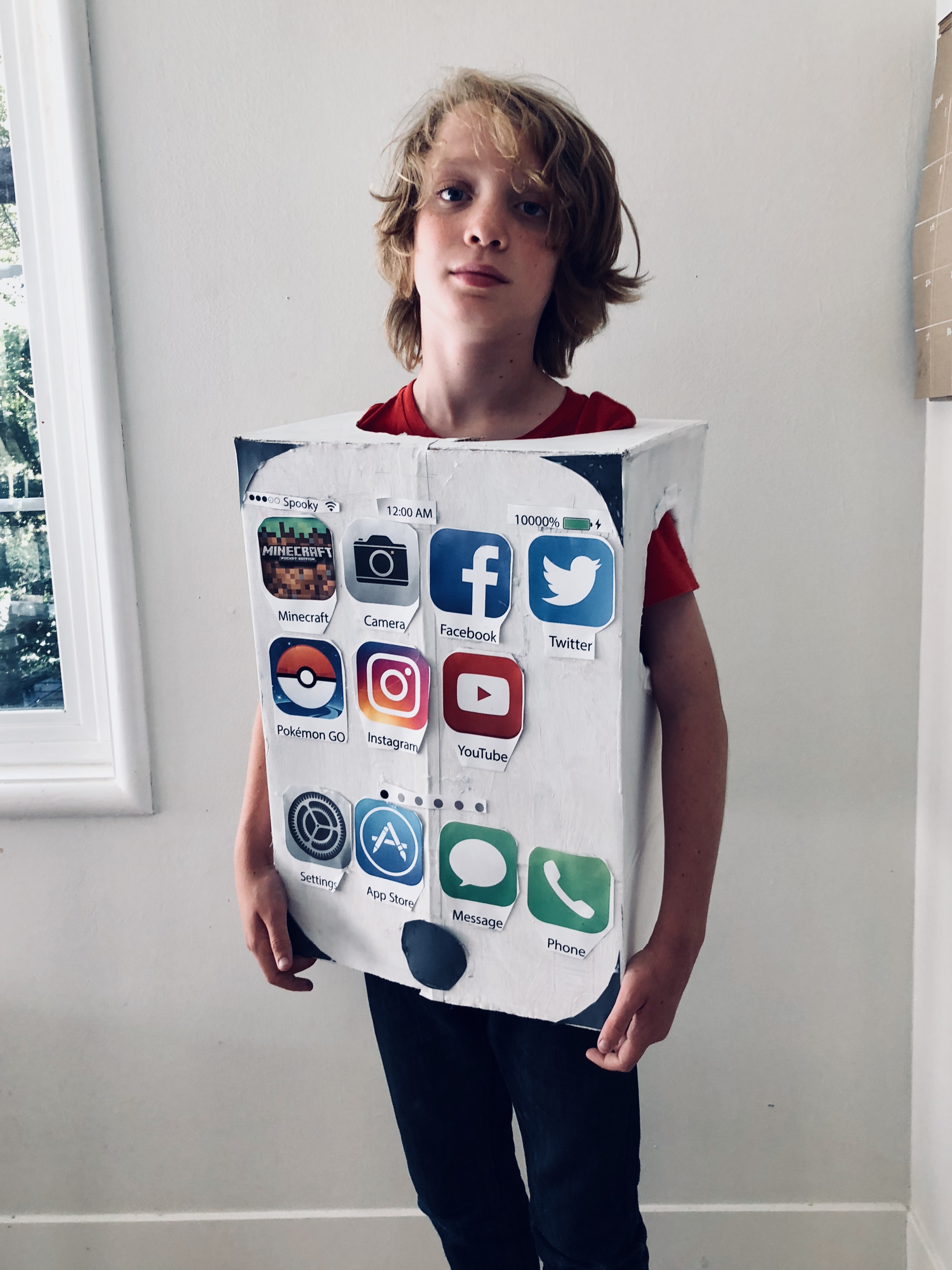 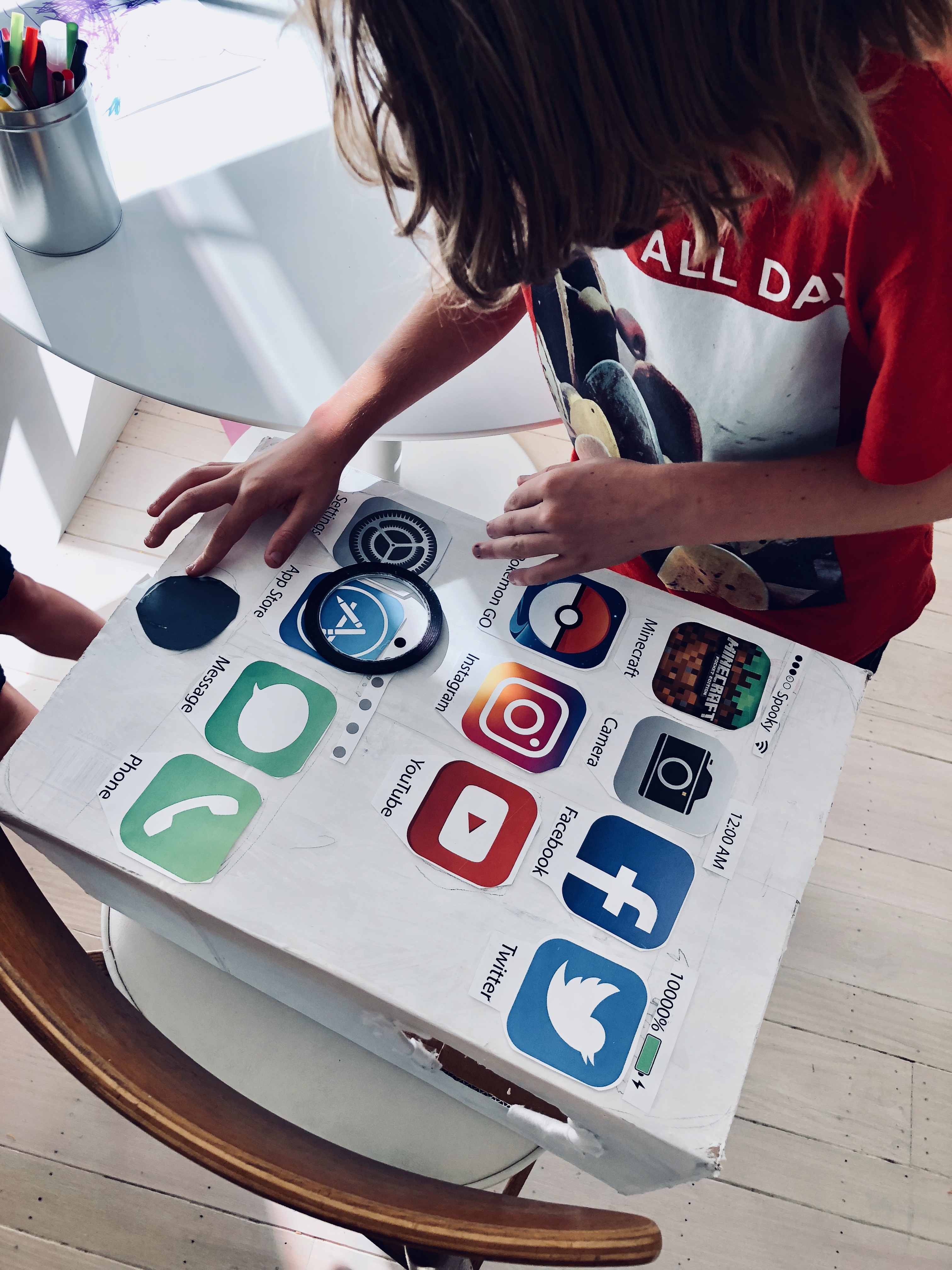 Henry came up with this iPhone idea completely on his own. I’m happy he’s transitioning out of scary costumes and into funny/clever (which is always better for older kids I think). He painted a box white and then added holes for the head and arms. He printed out app icons and glued them on.

Dot, of COURSE has to be a candy dot. right?? Except right now her candy dot costume has disappeared, so I might need to find a backup quick! 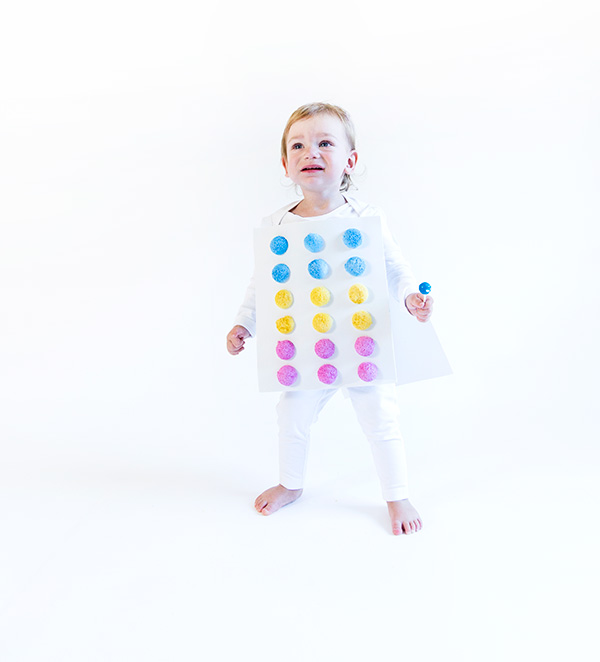 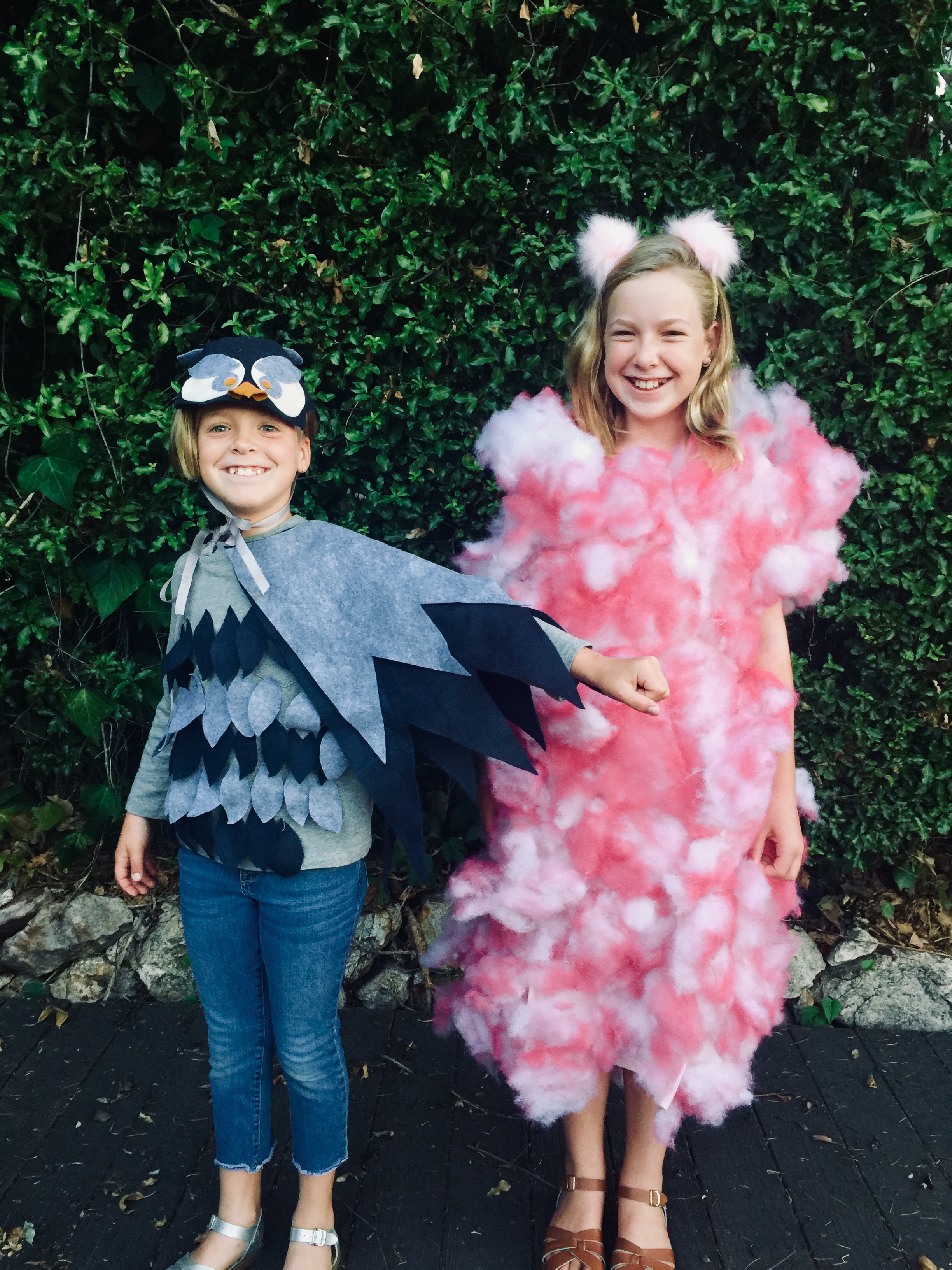 Marta: This year Sofia (who is 11) wanted to do her own DIY costume. She loves Pinterest now (like her mom) and had a hard time deciding on one costume. She finally decided to do the Cotton Candy one, she just had to spray paint some stuffing and hot glue it to a dress. Stella wanted to be an owl and Liz happened to have an owl costume she made from Henry years ago.

Michelle:  After watching Chitty Chitty Bang Bang this summer, my oldest child Annabelle (age 10) chose to repurpose her ballet recital costume and be a wind-up doll.  Ralph (age 4) wanted to be a spooky ghost. I purchased white pajamas from Primary and then made a simple poncho out of tulle and gauzy fabric. Lewis (age 6) chose a bat and I found the perfect costume on Amazon. Eleanor (age 8) decided to be a zombie because she loves the grotesque makeup. She gets really into character and has made-up voice and an entire backstory of how she became a zombie. I purchased her clothing at a thrift store and shredded it with scissors. 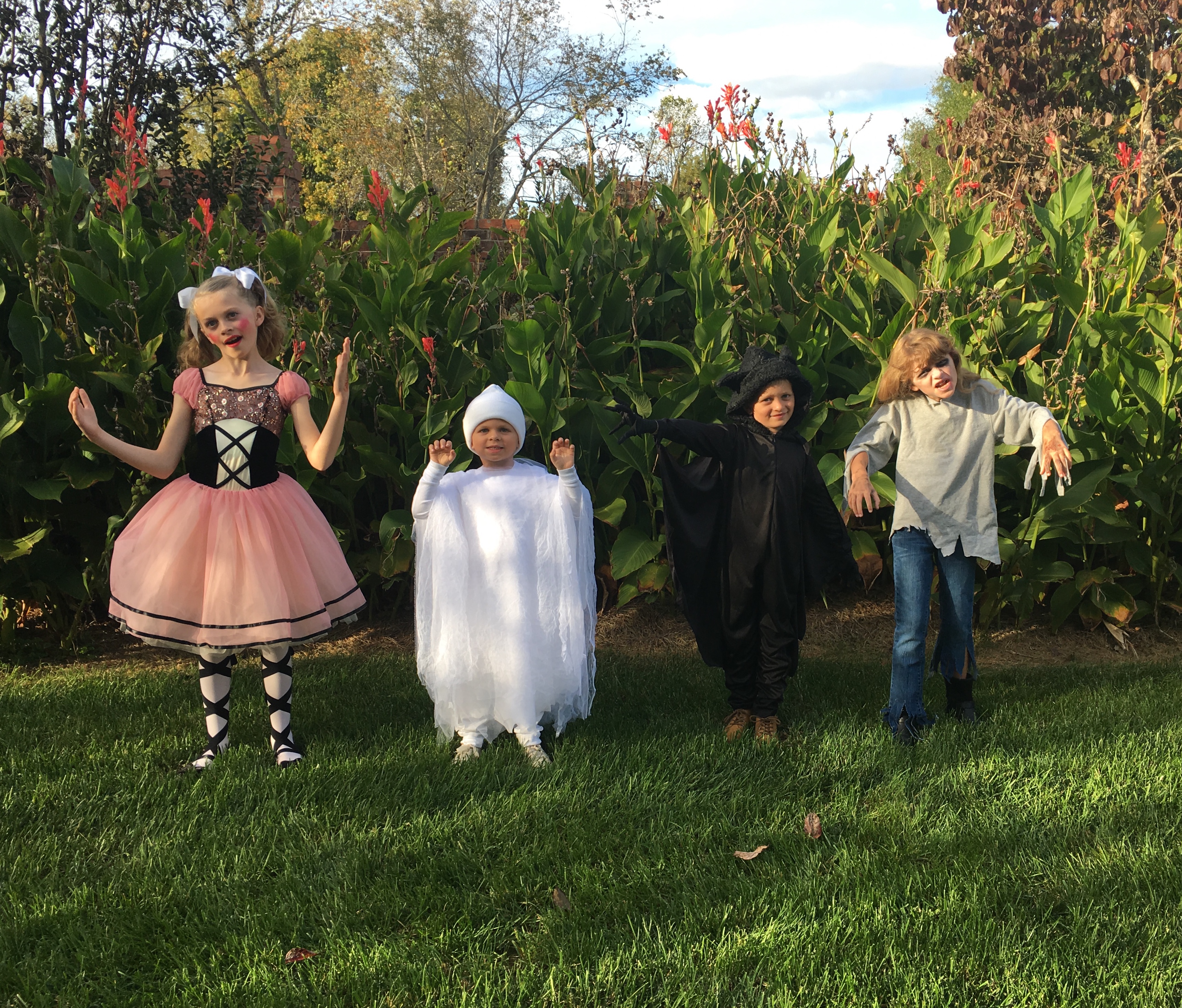 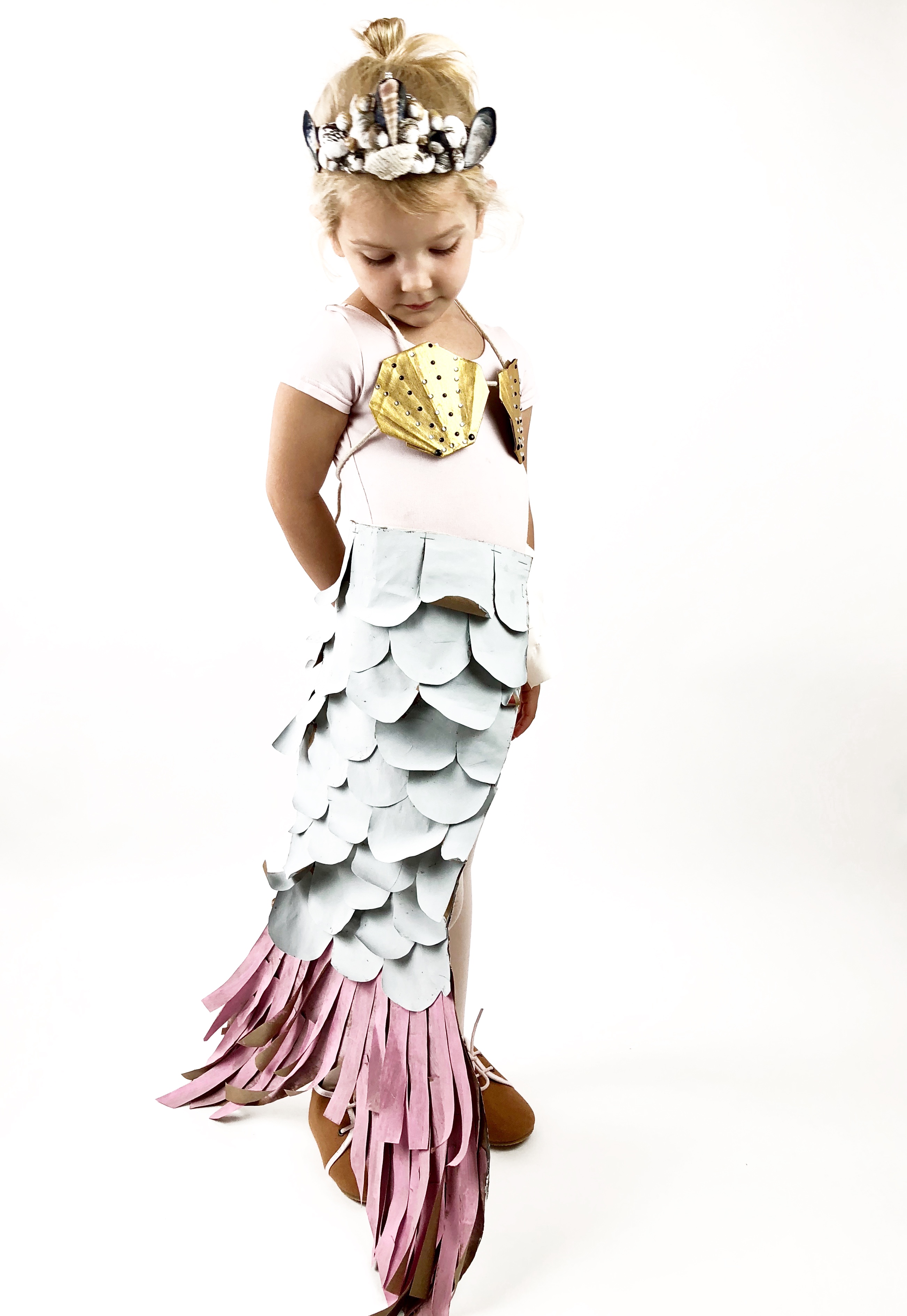 Gaby: Juniper was going to be a park ranger for halloween. She had planned this for nearly 6 months and couldn’t be more excited about the costume we had picked out for her.. until… one day i brought home some fabric to make a Daenarys Targaryan costume for say yes. Juniper took one look at the costume when it was done and said “WHAT IS THAT!’?. I explained to her who Daenarys Tagarian, the mother of dragons, was (as she’s 6 and obviously does not watch Game of Thrones).  She became instantly obsessed and completely forgot about her dreams of being a park ranger.  I still feel like its a bit strange for a 6 year old, but its fun for us. Plus she’s kind of a cool role model 🙂

Eleanor wanted to be a mermaid so we designed this costume below together. I really wanted to make something that I felt she could really sit down and help me with . She pretty much glued every seashell onto that crown and had a ball with the tail.  In the end, I think she’ll remember this Halloween forever because she played such a big part preparing the costume.

Sarah: This year we kept it super simple! The kids found these costumes at The Goodwill for around $6 each and were super excited about them! I wasn’t going to argue with that!! Viv (Voodoo doll) had actually seen this costume online and had her eye on it (score!).  Hollis, as Halo, is just really into his fake muscles so it’s a win all the way around. 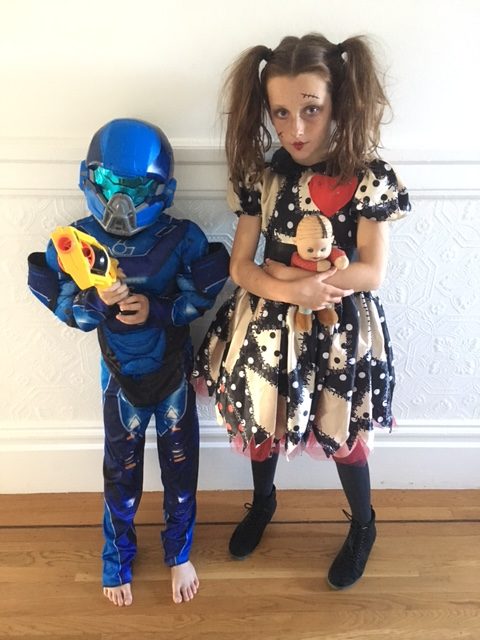 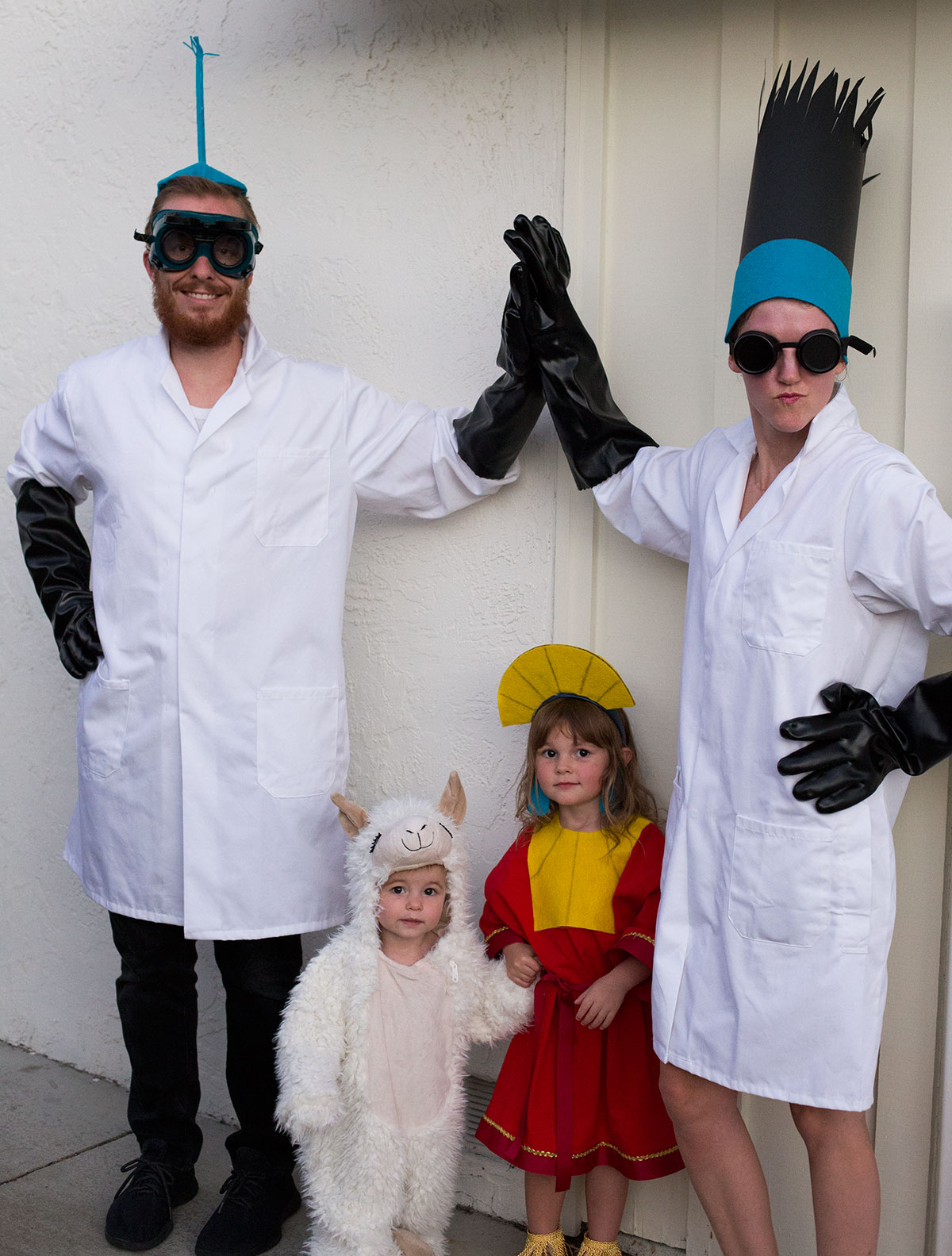 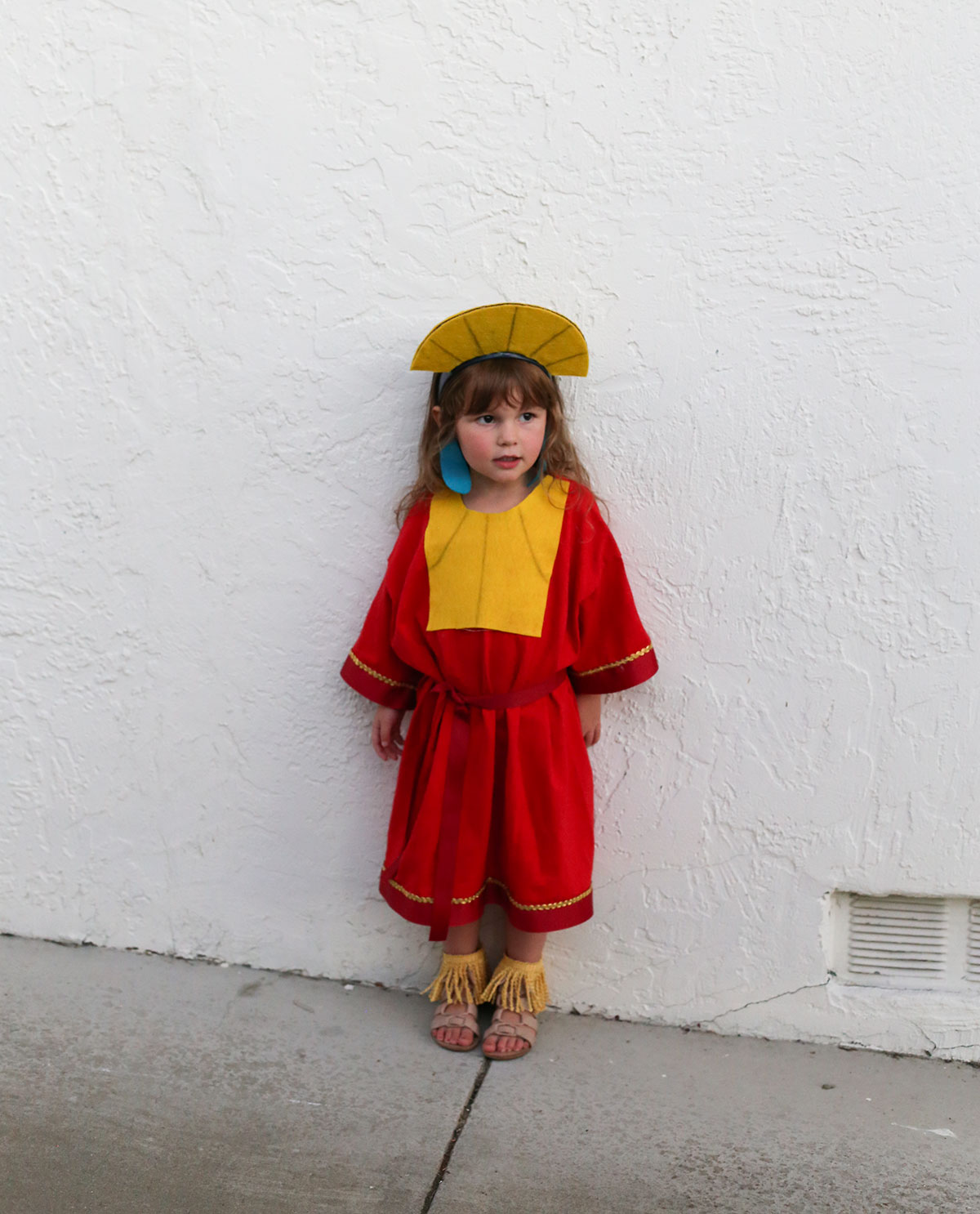 Ashley: Every year we attend a Halloween party at our church where everyone dresses up and goes all out, even the adults. We always do a theme as a family but I think the years of me picking a theme without input from the kids are about up. This year I found an incredibly cute llama costume at Target and knew we had to design our costumes around it. We tossed around ideas and finally settled on Emperors New Groove. Hazel’s costume was made by adding trimming and felt to a large red t shirt, most everything else was bought besides a few details like our hats.

That’s a wrap! How are you doing? Are you ready? If not, we have a tons of ideas for you here.

These are all so cute!The candy dots are probably my favorite!

Pingback: Best Links of the Internet

That cotton candy costume is super sweet, but also looks HIGHLY flammable. Just promise me she’ll be extra careful by all those jack-o-lantern candles.

The unicorn one is goals! So adorable, I would’ve loved it as a kid.

20 halloween costumes for your baby